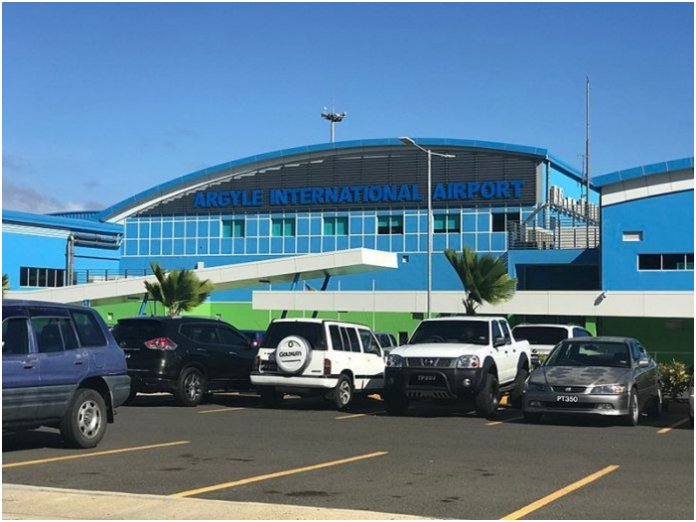 St. Vincent and the Grenadines (CMC) – The Argyle International Airport (AIA) in St Vincent is scheduled to be re-opened on Monday even as the scientists monitoring the La Soufrière volcano said that explosions with accompanying ashfall, of similar or larger magnitude, could restart soon.

The airport was forced to close because of ash generated from the April 9 eruption of the volcano and the chief executive officer, Corsel Robertson, said that due to significant ash deposits all operations at the Argyle International Airport, have been suspended, until 4.00 pm (local time) on Monday.

“The facility is undergoing rigorous cleanup of runways and apron to accommodate humanitarian flights as a priority,” Robertson said and the civil aviation authorities here said that the James Mitchell Airport, on the grenadine island of Bequia, will remain closed until April 19.

They said the Canouan, Union Island, and Mustique airports will remain operational from 9.00 am to 5.00 pm only to accommodate special flights with prior permission.

Meanwhile, the Seismic Research Centre (SRC) of the University of the West Indies (UWI) says the swarm of long-period and hybrid earthquakes continued at La Soufrière and that the rate of occurrence of these earthquakes dropped significantly on Friday night “and has remained near-constant since

“No episodes of tremor have been recorded in the last 12 hours,” the SRC said, adding that a new crater, measuring approximately 900 meters north to south and at least 750 meters east to west, has been formed.

“The crater is thought to be at least 100 meters deep and is centered in the southwest sector of the Summit Crater. Within the new crater, there are several vents, but only one can be identified clearly.  Other vents, as indicated by the ash and steam plumes are located in the northern part of the new crater,” the SRC added.

It warned that the volcano “continues to erupt although explosive activity appears to have ended at this time.

“Its current pattern of seismic activity may indicate growth of a lava dome, but this has not yet been confirmed.  Explosions with accompanying ashfall, of similar or larger magnitude, could restart in the future impacting St. Vincent and neighbouring islands,” the SRC said in its early bulletin on Saturday.

Volcanologist, Professor Richard Robertson has said that the ongoing eruption of La Soufriere is expected to be bigger than in 1979 but has only so far produced about one-third of the new material that the volcano did 42 years ago.