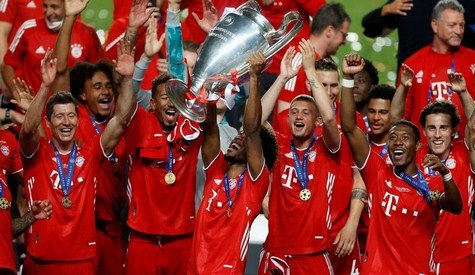 France international Coman appeared at the back post to head the decisive goal in the 59th minute as Bayern became the first team to lift the Champions League with a 100% record.

There were no fans to witness the triumph but Bayern celebrated as though 80,000 were cheering and, even as the lights went out nearly two hours after the final whistle, three players still sat in the centre circle, savouring the moment.

The victory at the Estadio da Luz, deserved after a dogged display once Bayern got in front, secured a second treble for the Germans, the Bundesliga and German Cup winners, and completed a remarkable first season for coach Hansi Flick.

Flick took over a struggling side in November, after a 5-1 hammering by Eintracht Frankfurt led to the sacking of Niko Kovac with the club fourth in the Bundesliga.

“It feels fantastic, we have a long journey behind us,” said Bayern midfielder Thomas Mueller.

“We came from very low, at least that is what it felt like, in the autumn and put in a sensational run. We had a bit of luck tonight and had (Manuel) Neuer in goal,” he added.

PSG, who were playing in their first Champions League final, paid the price for wastefulness in the first half as Neymar and Kylian Mbappe failed to beat Neuer from close range.

The French club has benefitted from huge investment by Qatari Sports Investments but, while dominant in their domestic league, they fell short at the final hurdle in Europe.

“We’re sad but we don’t forget all the positive things we did this season,” said PSG’s Qatari president Nasser al Khelaifi.