STEP offices in St. Kitts and in Nevis to work more closely 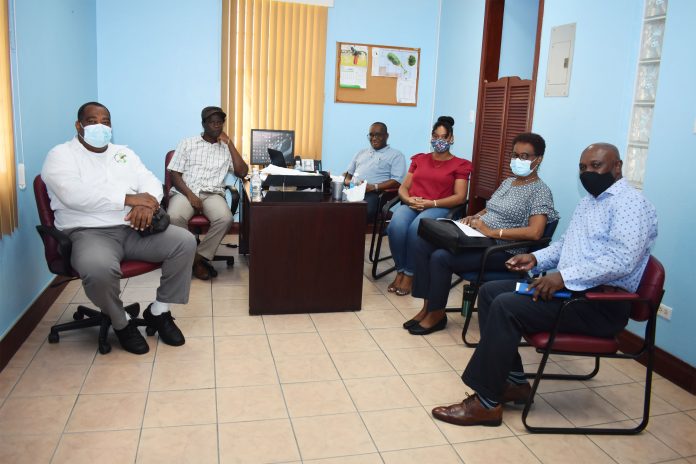 CHARLESTOWN, NEVIS (S.T.E.P.) — Director of the Skills Training Empowerment Programme (STEP) Mr. Emile Greene, was in Nevis on Friday, February 11 meeting with senior STEP staff where they discussed among others, the closer working relations between the two offices – in St. Kitts and in Nevis.

“Something we discussed was that we wanted for them to understand that of these two islands that we are just one – we are not two separate entities,” observed Mrs. Caines. “It is just one entity under the broad umbrella of Skills Training Empowerment Programme (STEP), and that information moves around freely.”

While there have been visits by St. Kitts staff to the Nevis office, Mrs. Caines noted that they want the visitations to be a little more frequent than it is now, and not just St. Kitts staff going over, but to have the Nevis staff to visit the head office in St. Kitts for them to see exactly the dynamics of STEP operations and how they do things at the head office, especially how the payroll system functions.

“Mr. Greene mentioned that at some point in time we would allow the payroll staff to go over to Nevis to work the payroll from that end as well,” noted Mrs. Caines. “So, it is a give and take – they will come down to see how it works and then we will send our staff over there to work it from that end.”

STEP has set up a new department that will be handling staff training and in apprising the Nevis staff, they were informed that training sessions will start shortly. The St. Kitts team wanted to establish which staff at the Nevis office would be a part of the training sessions as they wanted them to feel more comfortable in the scheme of things.

“The Training Officer that we have in St. Kitts will be visiting Nevis shortly to meet with them and discuss areas of training and see what ideas Nevis would come up with, what are their strengths and weaknesses over there so that we can incorporate all those into the whole training sessions,” she observed.

While at the Nevis office, Manager of STEP operations in Nevis Mr. Bernel Hanley introduced them to Mr. Vernell Powell who was recommended by the Nevis Island Administration to be hired as the STEP Field Operations Verification Officer in Nevis. The verification exercise, which has been taking place in St. Kitts, will allow STEP to keep track and be in a position to do an audit of all STEP workers attached to private businesses.

“Mr. Powell is the one who will be doing the verification on the Nevis end for us,” said Mrs. Caines. “We would have met with him, and had a talk with him and apprised him of what we want him to do but as time go by, we would meet with him again, and we would finalise everything. But as of now he has an idea as to exactly where we want to go, what he is supposed to be doing and how he should be carrying out those duties.”