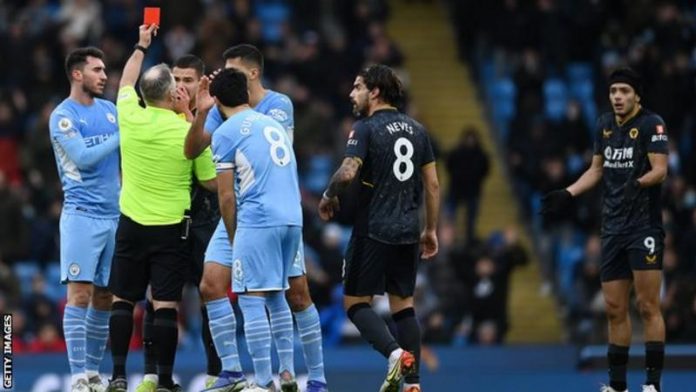 Raheem Sterling converted a controversial penalty to reach 100 Premier League goals and give Manchester City victory in a one-sided contest with 10-man Wolves.

Sterling kept his cool to roll his 66th-minute spot-kick past Jose Sa after a lengthy VAR check ruled Joao Moutinho had illegally blocked Bernardo Silva’s cross, even though it seemed to hit the Wolves midfielder on his armpit.

The decision compounded Wolves’ frustrations given they were annoyed at Raul Jimenez’s dismissal for two yellow-card offences within seconds of each other near the end of the opening period.

Not that the visitors could have any complaints on the balance of play. City had 24 shots compared to Wolves’ three. Sa made three excellent saves, Conor Coady headed an Ilkay Gundogan effort off the line, Max Kilman blocked a goalbound Phil Foden effort and Jack Grealish somehow failed to convert Sterling’s far-post cross with the goal at his mercy.

Kilman brought a save out of Ederson at the end but Wolves have failed to score in their past four games and managed just one goal in their past six.

In contrast, City have now six Premier League games in a row to maintain their place at the top of the table and keep the pressure on title rivals Liverpool and Chelsea.