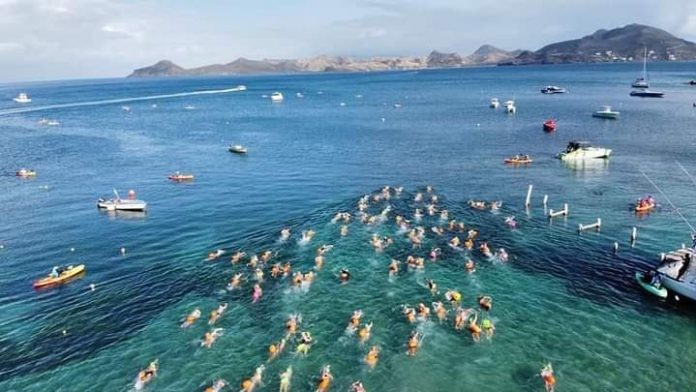 St Kitts and Nevis (WINN): Seven students between the ages of ten and 15 ably represented the Bring It Swimming Programme by swimming across 2.5 miles or 4 kilometres of open water to complete the St Kitts-Nevis Cross Channel Swim. The event was held on Sunday morning, March 27 from Oualie Beach, Nevis to Cockleshell Bay St Kitts.

The St Kitts Nevis Cross Channel Swim began at 8 am and of the 7 young swimmers, Justin Williams copped first place in the Under 19 category by completing the swim in a time of 1:35. In second place was the most experienced swimmer of them all, Hrishi Srinivasan clocking a time of 1:38. Anjua Pemberton placed third in a time of 1:46. Another young swimmer, Bajju Sharma followed closely behind in 1:50, whilst Abhijith Srinivasan crossed in 1:55 and Jackson Vogt in 2:17. The lone female, Skyla Connor crossed the Channel in 1:51.

On Monday morning (March 28), WINN FM spoke to the Bring It Swim Coach, Mr. James Weekes who gave a synopsis of Sunday’s event and expressed his delight with the overall performance of his students.

“My seven swimmers represented great enough, in a very big way. First off the weather was excellent. I was hoping for a nice calm sea and I did get a nice calm sea. I think that inspired the kids even more, not having to fight the wind and the waves.”

Weekes said the young swimmers were very anxious to start the race as some of them headed towards the sea and had to be called back to the starting line and wait for the whistle.

Weekes said he prepared his students in advance by encouraging them to not get caught up in the rush at the beginning but instead stay in their zone and “Ignore the hustle and bustle.”

Once the race began, Weekes indicated that he was on a kayak along the way with the swimmers and ensured that they were okay and encouraged them to challenge each other.

“I’ve been going to and from each child, making sure that they are comfortable, they’re relaxed, they’re hydrated; just overall making sure that somewhere along the line there is no doubt and nothing’s happening and these kids were swimming. Every once in a while I tell one of them to look up, see where you are, check your line, make sure you’re on target. Don’t swim extra. You just wanna be on target and keep going; and I keep circumnavigating them. Each time I go to different ones, they are all happy. They’ll stop, look up, watch me, talk, and make sure everything is good and then go again.”

The Swim Coach noted that he is proud of his swimmers, because of how they handled themselves across the channel and how they completed the race with such energy and with great times. “I know I must have done something right,” Weekes stated.