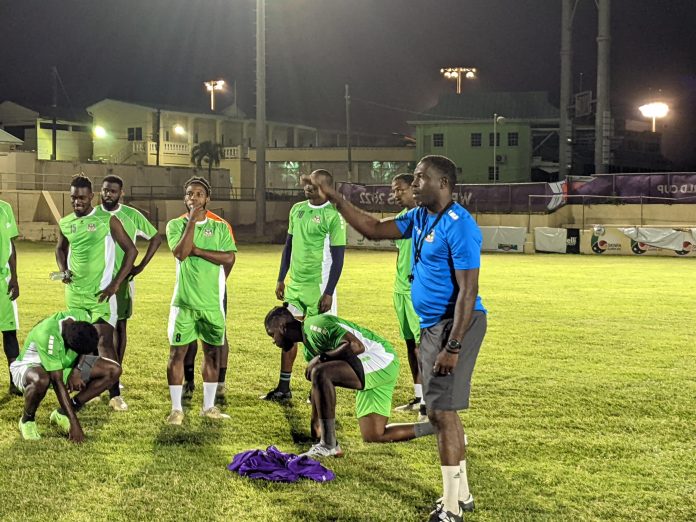 (SKNFA) The St. Kitts and Nevis Senior Men’s National Team, better known as the Sugar Boyz, have returned to training after several months of inactivity, due to restrictions brought on by the COVID-19 Pandemic. For the past three and a half weeks the Senior National Men’s Team has gotten back to their training regime under the watchful eyes of Coach Austin Dico Huggins. “This feels a bit awkward, but after a long while off, at least we got some good rest…I am looking forward to the challenge and looking forward to playing football once more,” Huggins said.

Even though the Sugar Boyz are not competing in the Concacaf World Cup qualifiers currently in play, there is still a lot to look forward to in 2022. The second season of the Concacaf Nations League will begin this summer and early preparation is the key to success in that competition. “We mostly do a lot of technical work with the ball, trying to build up the fitness with the ball and also 11 versus 11 plays…. we try to improve on the fitness and technical ability,” the coach disclosed. He also highlighted that the team is expected to play some practice matches in between, leading up to the start of the Nations League, which will help build match fitness.

One of the most senior members of the National Team is goalkeeper Jamal Jeffers. He expressed relief and excitement with the resumption of training. “It’s been intense, seeing we have not been playing football in a while…training has been good, intense, but fun,” Jeffers said.

A newcomer to the camp Iquon Fraser, is also happy that football training has resumed and is optimistic of the future. “This is the first-time training with the senior team. I love how the players come out to training; I love how the coaches set up the session,” Fraser said.

Fitness is also very important for the players and with such a long layoff from football, it was quite encouraging to hear that there were no major fitness issues in training. “A few of the guys had a few niggles probably because they were not playing for a while. Some of them were involved in eight a side (football matches) in their community so some of them have a few knocks here and there,” said team physio Kenny Douglas. “…the new physio (and I) …are dealing with that so hopefully by March when we have the friendly matches and come June/July when the Nation League starts, we will be ready to go,” he added. The SKNFA continues its mandate in raising the standard of football in St. Kitts and Nevis across the board. This is the beginning of a new era in St. Kitts and Nevis Men’s football.