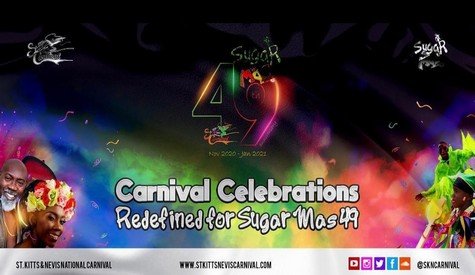 St Kitts and Nevis (WINN): Carnival Chair Shannon Hawley while on WINN’s weekday show Island Tea, gave an update on the carnival activities for the month of November which includes an art competition, the first calypso tent and a photography competition.

During the broadcast, she spoke about how well the St. Kitts & Nevis National Carnival Committee’s Creative Arts Competition under the theme: Covid-19 & Carnival is going. The competition is open to children between the ages of 6 and 17 to create a poster, poem or dance under the theme.

“So we have launched a creative arts competition. … Specifically for youth between 6 and 17 is going really well. We just launched it on Monday (November 9), people are very interested. We’ve been getting phone calls, messages, emails from parents, children, etc who want to participate, so we’re asking youth to submit poetry, short stories, dance, etc. Get creative to raise awareness for COVID-19 in the carnival setting and win money. Get an opportunity to win some money while doing … We think that that has been very, very popular in the space of three days, and we hope to have a lot of submissions and we’re looking forward to reviewing all of these submissions. We can wait for the competition to proceed at the end of the month.” ⠀⠀⠀⠀⠀⠀⠀⠀

Hawley also spoke about the upcoming launch of the Photography competition SugaScope.

The first Calypso Tent is slated to begin Saturday, November 14.

“So we are launching our Calypso tents this weekend, virtual series. The first one will be 100% virtual, however, based on further discussions that we plan to have with the police and the NEOC we hope to have some limited attendance in the future. However, for now, this coming Saturday, the tents will be virtual. It will be free … Anyone will be able to stream it live exclusively on the SKN Carnival FaceBook, YouTube pages as well as ZIZ radio and television.”

Hoping to release the full calendar the week of November 15, as was previously mentioned, the calendar will not include any private events, only core carnival activities.

“We hope to release our National Carnival calendar next week. It’s been ready now for two months. We have certain protocols that need to be in place and we hope that the NEOC and the police, we know that the borders are now open, we know it’s not business as usual, we hope that they would have the opportunity to review what we have provided in detail further this week and provide us with an update for us to be able to release the calendar next week.”

Hawley indicated that private events once approved may be promoted by the National Carnival Committee but will not be included on the Carnival Calendar. A separate calendar may be released for the fringe events once the Police and the NEOC are comfortable with the COVID-climate in the federation.

She later went on to tease some of the things the committee is preparing for Sugar Mas 50.

“I think everything that we’re doing this year is to prepare ourselves for the 50th anniversary. The new website, we are reviewing all of the events that we have had in previous years, looking at events which may not have been very successful with the aim of removing some of the events, moving up events earlier in the calendar, because now we have a full year. You would notice as well that we have already launched registration for the 2021 contestants. We will be releasing our National Carnival contestants in January for 2021, so you will be able to follow the Queens for the full year, it will give the opportunity for sponsors to have their particular contestant included in any marketing activity for a year. It will give the sponsors not only the sponsors, but with the general public; all eyes will be on the screen, so you know again, it will give the general public an opportunity to follow the Queens on their journey to the National Carnival Queen Pageant. And I’ve said it before moving all of the pageants specifically out of the December period is the aim for next year.”

The virtual opening of Carnival is slated for December 11.