St. Kitts and Nevis (WINN) – The Calendar of Events for Sugar Mas 50 was officially launched on November 10, showcasing the events that will mark the 50 years people of the Federation have been celebrating.

The Committee dropped the calendar on social media earlier this week (November 9), showing the return of some traditional core events for the 50th celebration. Sugar Mas 50 will be hosted virtually like last year and with a live audience.

The Chair of the St. Kitts and Nevis National Carnival Committee, Shannon Hawley, said that while the core event calendar has been released, the Committee is working with the COVID-19 Task Force to bring on more events during the season.

“And we felt that it was absolutely necessary to release our core events so that people could recognise and confirm that there definitely will be a Sugar Mas 50, and that’s what we did this week. And now the intention is to build on that. And of course, again, the situation is fluid, but we will continue to build on it with the advice and acting on the instructions of the Taskforce, and that’s what we intend to do. So stick and stay. Calm yourself; we will be adding additional events to the calendar.”

On Saturday, November 13, Calypso tents will begin virtually with the St. Kitts-Nevis-Anguilla National Bank Limited Senior Calypso Tent Series featuring 17 calypsonians. According to Hawley, they are working on making this tent the only virtual tent for the Calypso Competition.

Once approved, the following tents on November 20 and 27 will be virtual and in-person at carnival village.

Before the official opening of Carnival slated for December 3, a new event will be hosted virtually and will feature work from local designers.

“The Runway Challenge… is a new event on the Carnival calendar. It is an event focusing on the modelling skills of our national capital queens and also promoting our local designers. So we’re going to be featuring a number of local designers on that Runway Challenge as well as the Carnival Queen contestants. It will be judged. It will be virtual, so the general public will be able to log in and judge as well. And it will also feature a number of past Carnival queen’s.”

The Soca Monarch Competition is being reintroduced this year with 50 soca artists, new and returning, registering to participate in the event in an elimination round on December 4. After the eliminations, eight artists will be selected for the power soca segment, and seven artists will be chosen for the groovy soca segment who will go up against groovy soca king Rucas H.E on December 23.

The Soca Monarch finalists could look forward to their performances being subsidised by the carnival committee, and the winner will take home a EC$12,000 cash prize, but winnings do not end there.

“Very shortly over the next few days or week, we will be releasing something very special as it relates to the winner of the Soca Monarch Competition… We are collaborating with the Committee on another island to produce a song that will be sung by the winner of our Soca Monarch Competition with one of the most popular musicians from that island… We will be releasing that information shortly, and it’s really another way of us pushing our Soca Monarch artists to not only be local but regional and international,” expressed Hawley.

J’ouvert is back this year on December 27 and is different from the traditional event as no street events will be allowed this year.

“And for us again, working in collaboration with the task force and trying to come up with what creative way can we come up with to host a J’ouvert, but host a J’ouvert that is safe, that is as safe as possible, taking into consideration what J’ouvert represents. And the concept is this bubble J’ouvert which will be a J’ouvert not on the streets but in a secure venue featuring as many of the local talents as possible. Similar to what we had last year, we had a taste of J’ouvert last year; we featured over 15 artists and bands last year. The intention is to ramp it up and feature, even more, an event going for hours in a secured, huge,  spacious venue,” said Hawley.

The venue for the “Bubble J’ouvert” will be announced at a later date. 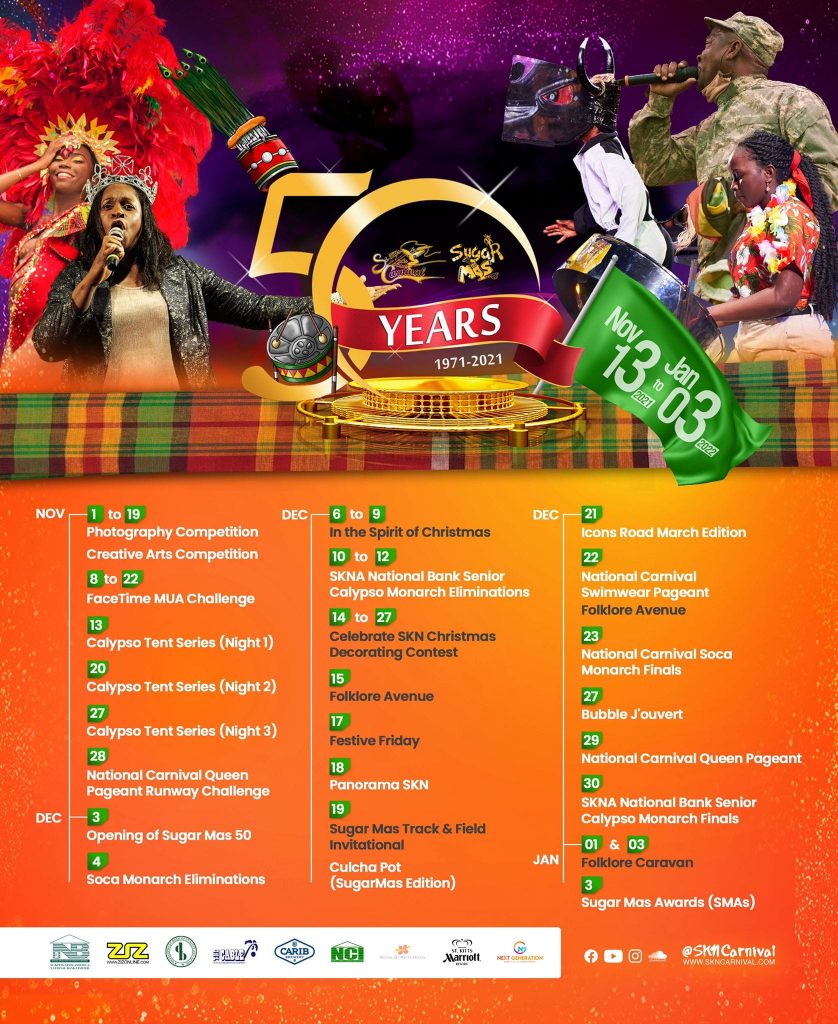 The other events we have come to participate in over the years but were not held last year because of the pandemic include Inception, Cooler Fete, and Glow Parade, to name a few. Hawley informed that discussions are underway for the hosting of fringe activities to be hosted by other stakeholders. The Chair urges that the general public keep a lookout for the inclusion of these events once approved.

“National Carnival consists of so many stakeholders, event promoters etc. and hopefully, shortly, we will be in a position to release the calendar of stakeholder events, and that is what people are most excited about and get most excited about when they see the traditional events on the carnival calendar,” shared Hawley.