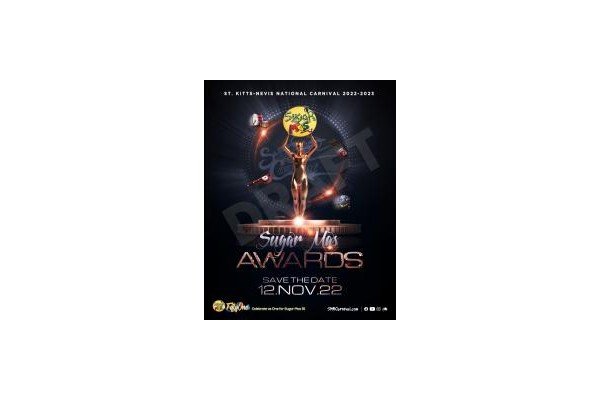 (Press release) The Sugar Mas Awards (SMAs) make its debut on Saturday, November 12, 2022. The ceremony takes place at the Marriott Ball Room where over sixty carnival stakeholders will be honored for their contribution over the past fifty-one (51) years.

The event is a formal affair starting with the arrival of all awardees who have to be
seated by 6.45pm. The St Kitts Nevis National Carnival Committee (SKNNCC) has
announced that the show will go live at 7pm via its Facebook and YouTube channels.
Six (6) categories will be up for grabs by individuals and organizations that have
participated, promoted, and supported National Carnival at various levels.

Gold Standard provides special recognition to an individual who has rendered
meritorious service to National Carnival on a continual basis throughout his or her
lifetime and at various levels.

Poinciana recognizes and rewards those who received first place in a National Carnival
event that is or was in existence for at least five (5) years.

Steward of Carnival is awarded to individuals and entities for consistent exemplary
assistance to the production and promotion of National Carnival.

Spirit of Carnival will be presented to individuals or entities who have demonstrated
excellence, consistency, and longevity in the growth and development of Carnival in
various areas.

Sweet Strings will be awarded to bands for their excellence in music and promotion of
National Carnival.

The SMAs will also feature an In Memoriam Segment that will pay tribute to national
carnival talents who have recently passed away.

An SKNNCC spokesperson stated, “The SMAs is indeed an excellent initiative as it will
give carnival lovers an opportunity to celebrate the achievements of those who
contributed consistently and significantly. There are so many to be honored that it will
take the SKNNCC about 3 – 5 years to pay tribute to all those who worked tirelessly in
the above-named categories over the 51-year period. There is no better time to begin
than NOW. We endeavor to have the SMAs each year and prominently featured on the
National Carnival calendar”.