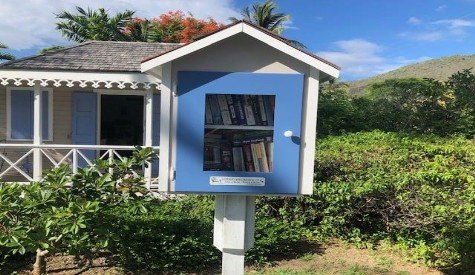 The program is designed to provide access to books throughout local neighborhoods. Currently, there are eight little libraries throughout the island, each with a supply of free books to encourage people to “take a book and share a book” to keep the books in circulation. In an interview with Suzanne Gordon, owner of Sugar Mill Real Estate and initiator of the program, WINN gave a brief snapshot of the Little Free Libraries.

According to a post shared on social media, Gordon got the idea for the libraries after she read the obituary of the late founder, Todd Bol, who had established the library idea. His first library, a little red schoolhouse, was built in tribute to his mother. After traveling to Florida, then London, and then New Hampshire, Gordon noticed these little libraries everywhere and thought they’d be terrific on Nevis.

“So I’ve had to replenish maybe six of them already because people have taken them and some people have brought some back, but mostly the books have just gone, which is good because it means the books are getting into the community.”

Aside from Sugar Mill Real Estate, Art Santelli and Todd Miller, both of Cliffdwellers helped with the construction costs. With the help of the talented and creative carpenter Vishal Sukh, they were able to start construction on the little buildings.

Currently, there are 100,000 libraries registered in 100 countries worldwide.

“Now, maybe there’s eight more… because of Nevis. I think it’s just a service that people already seem to be quite excited about and people have called me and said oh, can I put books there? And yes of course…”

The program also received a donation of CDs from the Hermitage with opera, classical music, and old fashion show tunes, and according to Gordon seem to be very popular, as people seem to be taking them.

Gordon, who is currently based in Nevis, said the focus of the program is tailored to Nevis. However, she indicated that if anyone in St. Kitts would be interested in starting a Little Free Libraries program she would be happy to assist and advise them as to how she accomplished the task.

The island businesses who have agreed to host the libraries are Nevis Car Rental (Cocky’s Bar); Hillcrest Grocery & Bar in Fountain, H&M Seafood Bar in Cotton Ground, Riviere House in Charlestown, Alvena Gas Station in Gingerland, Rose Stop & Shop in Jessups, D’s Cellar in Chicken Stone, and Cliffdwellers. There are two more libraries to be added.

“We do have two more libraries that have been built but I have not put them up yet. I’m currently looking for locations and would be interested in suggestions of places people think would be good locations trying to find places where people… routinely either congregate or pass, or in neighborhoods, that are quite densely populated and possibly would get a lot of use.”

For more information or to donate books, please call (869) 663-8910 via Whatsapp to help keep this literacy effort continuous.

Rotimi is having a “meeting” on stage at the #stkittsmusicfestival #WinnMediaSKN ... See MoreSee Less

Byron Messia in a post-performance interview shares his experience performing on the 2022 #stkittsmusicfestival stage for the first time.#winnmedianews ... See MoreSee Less