Supt. Henry: It Is Illegal To Damage Political Campaign Materials 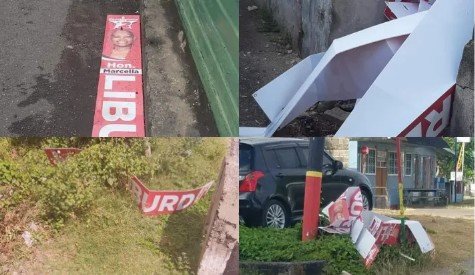 St Kitts and Nevis (WINN): The police force is strongly warning citizens and residents against tearing down or damaging banners belonging to political parties during the course of the campaign.

Police Superintendent Cromwell Henry gave the warning Thursday (May 21) while speaking on the radio program, ‘Policing with You’ said,

The announcement comes against the backdrop of the St. Kitts-Nevis Labour Party (SKNLP) candidate in Constituency #2, Marcella Liburd reportedly saw her campaign posters removed and turn-up by unknown individuals.

“…I just want to say this to the young men, do not allow anyone to encourage you or pay you to engage in wrongdoing. Do not allow them to do that because the very persons who are doing t that you are disrespecting you in that way, they would never put their family members or their close friends to do the same thing what they want you to do.”

Meanwhile, Superintendent Henry urged people to work with the limited shared space for the elections.

“One of the recurring problems that we always have around this time during campaigns is parties defacing each other’s campaign material. …We really want to discourage that type of activity, I mean we have come of age now, we have matured now as an independent country. We should be mature enough to respect each other’s views and make our own decision without having to be violent, without having to be physical against our opponents. And so if a party puts up a sign, you can put up yours next to him and let people choose. If there is no space then go somewhere else find a space close by, create space…but do not take down somebody else’s sign and put up yours or destroy someone else’s thing just because you are on the other side that is wrong.”No one has been charged for the destruction of the posters.