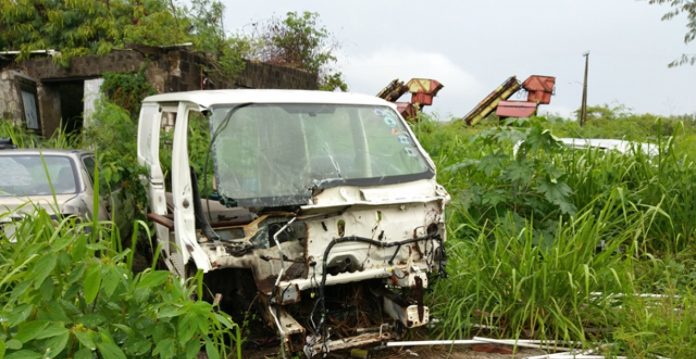 St. Kitts and Nevis (WINN) – The Solid Waste Management Corporation (SWMC) is continuing its conversation about derelict vehicles and white goods (stoves, refrigerators, etc.), focusing on the impact these types of waste has on the environment.

“From a disaster standpoint, especially derelict vehicles, when you think about the fact that where they are parked, sometimes they will be parked in a drain or they are dumped, for the white goods, They are flooding risk for us. Because… once water cannot go its natural course it will find another way to divert and so sometimes depending on how these vehicles are parked, then you’d find during heavy rain or during a tropical cyclone, the water because it doesn’t have its world that was designated for it to travel, would find another way to go the new route and then it will cause flooding. And then you have the white goods problem, refrigerators or what have you, coming down when the ghauts are running and then blocking the bridges, causing the water to spill over. And I think that happened some time ago… vehicles that blocked the bridge and caused a very big flood in Basseterre. So we have examples of such actions actually impacting the community,” expressed Lennon-Petty during the September 7 broadcast of Talking Trash on WINN.

As the representative from NEMA pointed out, because of adverse weather conditions, those vehicles, metal scraps and white goods may end up in the ocean and come back to haunt those who put them there, whether directly or indirectly, especially as it relates to the reefs that border our island.

“It creates habitat destruction. If it [the waste] jams into a reef, that’s a nursery… Let me use a land reference. It’s not just that, like all the nurseries, just vanished, on land, but it’s literally all the nursery population vanished on land. So that means that we won’t have futureKittitians and Nevisians. [The] same thing for the ocean. Once you destroy the nursery habitat, you literally eliminate that population line; [it’s] not just who else we would affect, but what else we would affect.” said a representative from the NGO, St. Kitts and Nevis Clean Seas.

It was also referenced that such indiscriminate dumping can also negatively impact marine life.

Vesta Southwell, former Public Relations Officer for NEMA, said that there should be more focus on communicating the cleanup efforts and the effects illegal dumping has on our ecosystem.

“The bottom line to all of this lovely conversation is communication. The motive for dumping illegally becomes irrelevant… in the eyes of the law. Unless we have certain legislation in place to protect the environment, and I believe that we do… enforcement might be a little trickier… [But] we have to ensure that people not only understand that what they’re doing is wrong, just wrong across the board, but how it affects them, us, and the future of the environment. So communication is critically important in all of this.”

These discussions come as part of the SWMC’s islandwide cleanup initiative that started on September 1, focusing on derelict vehicles and shifting that focus to white goods in October.

You can listen to the whole Talking Trash Segment here: