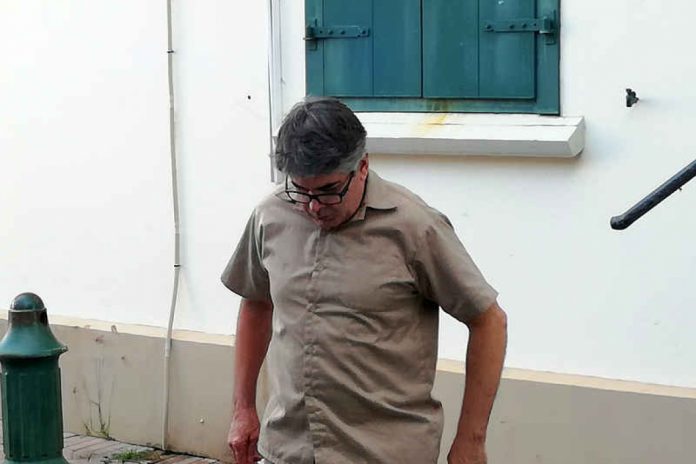 PHILIPSBURG–Almost three years after he was sentenced by the Court of First Instance in St. Maarten to seven years in prison for a large number of crimes, among them the sexual abuse of a minor child and possession, production and distribution of child pornography, Collin Kristensen (63) is still in Scotland fighting his extradition to St. Maarten. In doing so, he is effectively thwarting efforts by the Joint Court to start appeal hearings.

Kristensen was sentenced in February 2019 for a long list of crimes, which included misappropriation of a number of diamonds in the aftermath of Hurricane Irma in September 2017, mistreatment with the use of a Taser gun, bribery of a police officer and possession of a quantity of cocaine.

The Court also found him guilty of the sexual abuse of his then-six-year-old daughter and of possession of a large quantity of child pornography, which he also distributed. This concerned videos and photographs of his own daughter and unknown children.

These crimes were committed between December 2015 and December 2017. Kristensen was arrested on July 6, 2018. He appealed the sentence, as he only pleaded guilty on the cocaine-possession charge.

In December 2019, the Court of Appeals temporarily suspended Kristensen’s pre-trial detention for “urgent” medical reasons, but he should have returned to the Pointe Blanche prison no later than May 7, 2020.

While in detention in Curaçao, Kristensen was diagnosed with a herniated disc in his lower back and his condition was aggravated by a “homemade” prosthesis on his left leg.

Kristensen claimed he would require highly specialised surgery to his spine which is not available in the Dutch Caribbean. As obtaining a prosthesis in St. Maarten proved to be near impossible and very costly, Kristensen, who is of Scottish/Danish descent, requested the court’s permission to undergo surgery and to obtain a prosthesis in either Denmark or Great Britain.

His detention was suspended to allow him to undergo specialised surgery abroad and to provide him with a special leg prosthesis. In case he was not able to return on time, the court demanded a doctor’s letter to indicate the reasons for any delay, such as a hospital stay or rehabilitation.