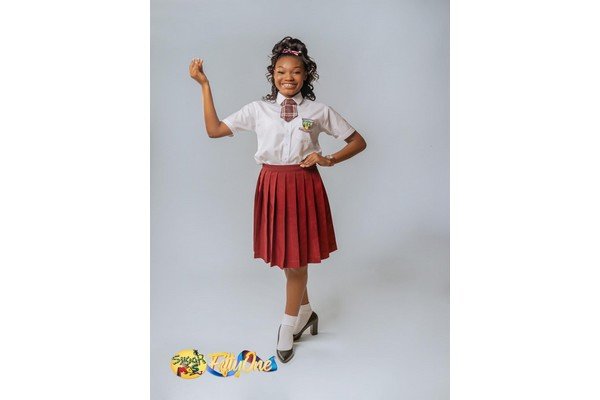 Takyla won the hearts of the judges, thus coming out on top in four of the five judged segments; Ambassadorial Speech, Ambassadorial Costume, Performing Talent and Onstage Interview.

Takyla was presented with a Laptop sponsored by Courts, a necklace sponsored by Diamond International, a free value pack for three months and a Platinum Loyalty Mastercard from The Cable.

The 1st runner-up position was awarded to Miss Washington Archibald High School- Cajoy Isaac with a total of 618 points. Cajoy received a Tablet sponsored by Courts and free internet upgrades from The Cable. She also received the Miss Photogenic Award which was selected by Modern Elegance Photography. She was presented with a photo of herself taken at the pageant’s official photoshoot.

Miss Clarence Fitzroy Bryant College- Maleah Erskine placed 2nd runner-up with 611.5 points. Her prizes include a Tablet from Courts and three months free internet upgrades sponsored by The Cable. She was also presented a gift basket for winning the Miss Amity Award. Her fellow contestants considered her to be the friendliest, funniest and warmest of the group.

Meanwhile, the 3rd runner-up position was awarded to Makaila Martin from the Immaculate Conception Catholic School amassing a total of 609 points. She scored the majority points in the Teenage Evening Wear segment. Makaila also won three months of free internet upgrade from The Cable

Miss Teen Social Award was presented to Miss Charles E Mills Secondary School -Seia Mason. The selection was based on her receipt of most likes on social Media. She received a Tablet sponsored by Courts and a monetary contribution sponsored by Robertine Webbe- Director of Creative Economy.

Winners of each segment, as well as their respective schools, received a monetary gift from the Carnival Committee.