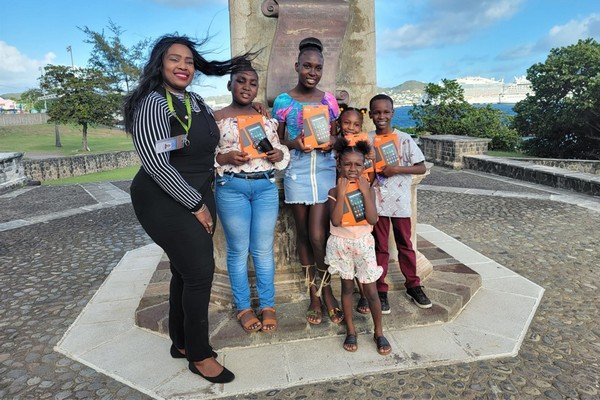 BASSETERRE, ST. KITTS, December 20, 2021 (MMS-SKN) — Team Ethanol, a community-based organisation that was formed a year ago, has in its first outreach activity brought Christmas cheer to five children from the Market Street area in Central Basseterre who lost their mother last year.

At a colourful ceremony held on Friday, December 17 at the Cenotaph, the War Memorial in Fortlands, Basseterre, Team Ethanol leader, Mrs. La Toya Lake-Marshall and some members of the team made a presentation of five Fire Tablets – one each to the five ecstatic children.

“My first project which I did, is to give to five beautiful children who are under the age of 16, and who are the kids of a beautiful young lady by the name of Tessa Woodley,” said Mrs. Lake-Marshall. “She died in childbirth and I felt so passionate about those children, knowing that they do not have a mum to support them anymore.”

“Yes, they have the dads but nothing beats when you have that mother figure,” observed Mrs. Lake-Marshall. “I lost my mother a year and a half ago and my mum and I were very close, so I know how it feels. So, I decided to do something to add some Christmas cheer for them.”

Team Ethanol has been making lunches and saving whatever money they would raise from the sales. The five Fire Tablets were bought from those funds, and the donation to the children was their first outreach activity. The tablets will assist the children with their studies, do their homework, and other educational programmes.

“The kids were really excited and it brought warmth and joy to me to see that I could put a smile on their face and bring something positive from the negative part of losing their mum,” observed the Team Ethanol leader.

Mrs La Toya Lake-Marshall is the Director of Forensics with the Royal St. Christopher and Nevis Police Force and is based at the Tabernacle Police Station where the forensics labs are housed. She explained that Team Ethanol is her brainchild with her husband, as she wanted to form something that is forensically inclined.

Ethanol, she pointed out, is an astringent with alcohol that everybody knows of, but in a good way. She explained that alcohol is basically an astringent that people use as it helps to disinfect, and as scientists and experts they rely on alcohol a lot to clean. She further noted that even in Covid-19 situations alcohol is the main ingredient in the hand sanitisers that are now in everyday common use.

They do not have an office but can be reached individually. However, Mrs. Lake-Marshall’s kitchen is Team Ethanol’s unofficial nerve centre where all the food is cooked. Dishes sell for not more than $30 and can even be delivered. All profits are saved for the organisation’s intended philanthropic programmes.

Mrs. Lake-Marshall, who is originally from Antigua, informed that she loves to cook, having been trained by her mother. On Saturdays when she is free, she would cook a Caribbean dish and noted that there are business people in the community who love her cooking and her incentive. They are the ones who support the ministry of assisting others.