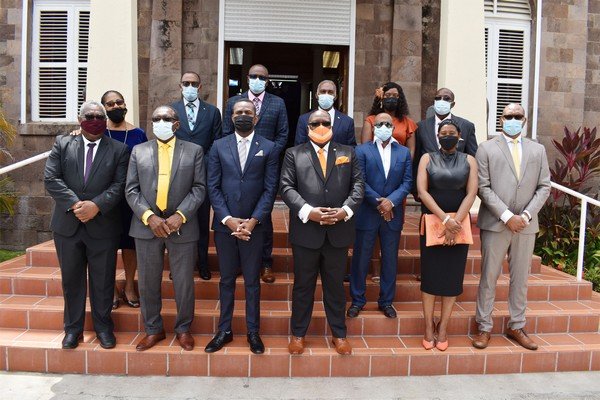 The multi-partisan coalition group dubbed ‘Unity’ made up of the People’s Labour Party, the Concerned Citizens Movement and the People’s Actions Movement won the general elections with nine of the eleven seats in the Federation securing their second term as the ruling party.

On Sunday, June 6, the Unity Coalition attended a church service at the Wesley Methodist Church to commemorate the Unity Government’s second term in office.

Prime Minister Dr. Timothy Harris during his remarks at the service thanked the cabinet, churches and people of St. Kitts and Nevis.

To mark the occasion of his first year as a parliamentary representative, Jonel Powell Minister of Education, Youth, Sport & Culture and representative for Central Basseterre shared some remarks to his Facebook page on June 5.

In his capacity as the Minister with responsibility for sport, he highlighted some of the projects on sporting facilities within his constituency despite COVID-19 and financial setbacks.

“In this first year, we’ve managed to achieve some of our goals, and [continue] to pursue others. For instance, for many years before my tenure, the young men and women in the McKnight and Irishtown communities had been crying out for assistance to save their crumbling sporting facilities that are used for football, basketball, and other events. With much urgency, I was successful in improving the sporting and recreational experience through a major roof replacement, installation of a new lighting system, and a full paint job on the pavilion. In addition, the Garden Sporting Complex benefited from the installation of new backboards for the basketball court.”

He noted other projects to commence: “…another area of sporting enhancement that will soon be unveiled in the Shadwell Pine Garden District… the Shadwell Pine Garden recreational facility, and [football] field, which will be breaking ground before the end of this year. This facility will greatly aid the sporting engagements of the people, and prepare them for brighter prospects in this sporting discipline. This recreational park and [football] field will be the first of its kind in St Kitts and Nevis. Not too far from the new [sporting] facility will be a green space that will be used as a community park for the children and families of Pine Gardens. Work on this project has already started, and will soon be accelerated,” according to Powell.

As the minister with responsibility for education, Powell spoke about the challenges that COVID-19 posed during his first year.

Currently, those challenges continue to persist with the closure of all schools in the Federation and the transition to online instruction, mirroring a similar situation in 2020 especially on the cusp of CSEC and CAPE examination.

Before the current community spread within the Federation, CXC made the decision to delay exams to the end of June because of the prevailing COVID-19 crisis within the CARICOM region.

In spite of those challenges, Powell indicated that improvements to the education system continue and he expects to roll out a new program in the near future.

“The program, which is called “Preparing for the Working World” will involve a series of courses, following a curriculum that was jointly developed by Fulbright Scholar, Professor Leslie Cordy of the Auburn University, in collaboration with the Clarence Fitzroy Bryant College and our very own national skills. The rollout of this initiative will be implemented later this quarter. More details on this will be coming shortly.”