Tense moments between SKNLP and PLP supporters outside Constituency No. 3 Nomination site 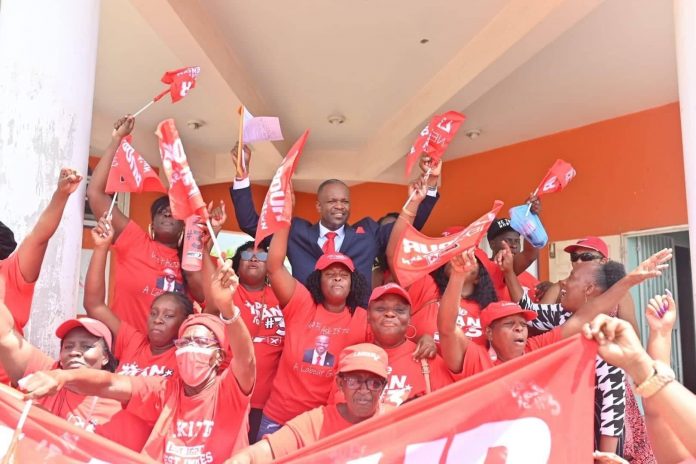 In Constituency No. 3 at the nomination site, the St. Johnson’s Community Centre, there seemed to be a confrontation between SKNLP and PLP supporters captured in a Livestream on SKNLP candidate for No 3 Konris Maynard’s Facebook page.

“As usual, we see what PLP’s plan is for this election, to disrupt everything. As we were going along the road, we were the closest to the St. Johnson’s Community Centre, we were about to turn up on St. Johnson’s Avenue, and the police were given instruction to stop us and allow PLP to come from way beyond yonder to go before us. We said that this is a first come, first serve; if PLP was ahead of us, we would allow them, but the police stopped us, prevented our vehicle from moving and allowed PLP to encroach upon us. This is the type of tactics that they are using, but we will not be phased,” said Maynard.

In the footage from the live, law enforcement was seen stopping Maynard and his supporters from entering the community centre, and Maynard’s father was taken, by police, out of the premises.

Inevitably, Maynard entered the nomination site for No. 3 and became an official nominee for the SKNLP.  PLP candidate Akliah Byron-Nisbett was also nominated.

“I am so excited… to be nominated in St. Christopher No 3. We are ready and strong for election day… We will not be distracted. We will not be intimidated. No. 3 is definitely going to be moving forward with Akilah Byron-Nisbett.”

At the time of writing, several candidates had already visited the nomination sites and sworn their oaths, including all candidates from the St. Kitts Nevis Labour Party, People’s Action Movement Jonel Powell and Chesley Hamilton and Peoples Labour Party Akliah Byron-Nisbett and Jacqueline Bryan. On Nevis, leader of the Nevis Reformation Party, Dr Janice Daniel Hodge, and for the Concerned Citizens Movement, Eric Evelyn and Alexis Jeffers have been officially nominated.