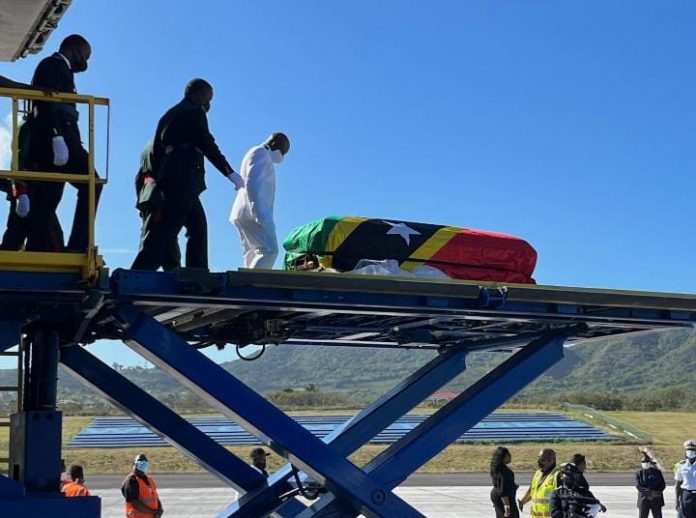 St Kitts and Nevis (WINN): A casket carrying the remains of His Excellency Vance Winkworth Amory arrived at the Robert Llewelyn Bradshaw International Airport on Wednesday afternoon April 20. The casket arrived on a British Airways flight from the United Kingdom, draped in the flag of St Kitts and Nevis. The body was accompanied by Amory’s widow, Mrs. Vernie Amory.

On hand to usher the body home was the Cabinet of Ministers and other dignitaries, who also had the opportunity to greet and express condolences to Mrs. Amory.

Officers of The Royal St Christopher and Nevis Police Force and The St Kitts-Nevis Defence Force bore the casket. Following the arrival, there was a brief military procession from the RLB International Airport to the Jenkins Funeral Home.

The body of Ambassador Vance Winkworth Amory will lie in state at Government Headquarters on Thursday, April 21 and Friday, April 22. However, a special viewing for the Ministers of Parliament will be hosted from 9:00 am to 9:30 am on Thursday morning; after which, members of the public in St Kitts will be given the opportunity to pay their final respects to Ambassador Vance Winkworth Amory.