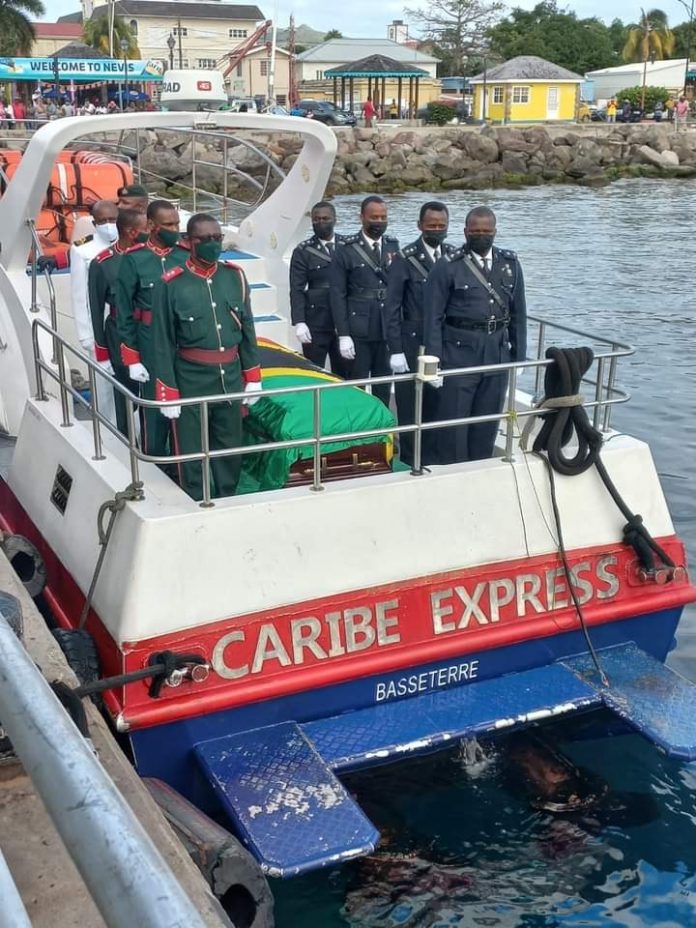 St Kitts and Nevis (WINN): Parliamentarians in the Nevis Island Assembly and Senior officials of The Royal St Christopher and Nevis Police Force assembled at the Charlestown Ferry Dock on Friday afternoon, April 22 to receive the body of the Former Premier of Nevis, His Excellency, Ambassador Vance Winkworth Amory.

The body arrived shortly after 4 pm on Friday afternoon onboard the MV Carib Express draped in the National Flag of St Kitts and Nevis and accompanied by gazetted officers of The Royal St Christopher and Nevis Police Force and The St Kitts Nevis Defence Force.

Also present was Amory’s widow, Mrs. Vernita Amory, who witnessed for the final time the arrival of her husband on home soil. The body of Ambassador Amory was escorted to Elliott’s Funeral Parlour, Gingerland, where it will remain until later next week.

According to communication from the Nevis Island Administration, the body of His Excellency, Vance Winkworth Amory will lie in State at the Theodore L Hobson Court Building in Charlestown on Thursday, April 28 and Friday, April 29 from 10 am. The General public in Nevis will receive an opportunity to file past the casket and pay respect to the former leader. A book for condolences will also be available.

The Official Service for the Late Ambassador Vance Winkworth Amory will be held at the Elquemedo Tonito Willett Park on Saturday, April 30. The nation up until such time will continue to observe a period of mourning designated by Governor-General, Sir S. W Tapley Seaton.