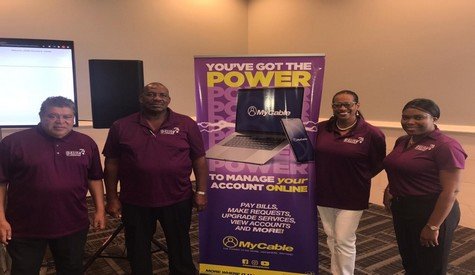 St Kitts and Nevis (WINN): During a press conference on Friday (August 28), The Cable launched its new site and its new MyCable Account Management capability.

After the permanent increase in broadband speeds for all internet packages made effective on July 22, The Cable is now undertaking its new step in their overall vision, allowing customers the ability to manage their accounts.

The Cable CEO Patricia Walters at the press conference described the capabilities of the account management functionality.

The MyCable functionality allows customers to pay online in real time, upgrade their internet and cable plans, view their bill balance, and carry out simple troubleshoots for unscheduled internet interruptions. There are also plans to roll out more options in functionality for MyCable users.

“The real reason that we’re here is the launch of My Cable. One of the questions that haunts me as a CEO is… How does this company remain relevant to its customers? How do we keep evolving so that customers want our services and don’t go to someone else who may be smaller, more flexible, more attractive to them? What is important to our customers right now? And one of the things that’s important of course apart from affordable accessible broadband speeds is; how do I interact with The Cable that’s convenient to me that’s safe for me and that’s easy and our answer is MyCable Online Account Management.”

The stand out theme for the press conference was vision and Othniel Hyliger, Chairman of the Board for The Cable expressed that another big vision of the cable is to become a regional name in the telecommunications market after addressing the rumors that The Cable would be sold.

Walters also made mention of another vision the company has, making available for every community access to at least 100MB internet speed as the starter internet package.

Hyliger in his remarks hinted at the possibility of an Initial Public Offerings (IPO) in the future making share offerings available to the public for investment.

Although they are putting some focus on their online capabilities, a streaming platform from The Cable is still not available but Walters indicated it is well within the vision of the company.