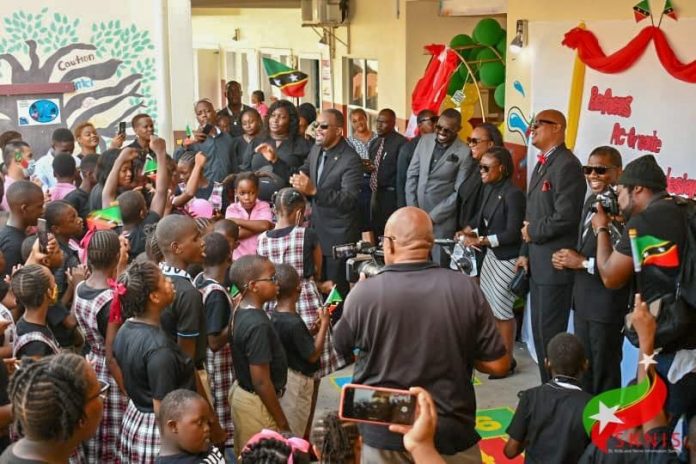 St. Kitts and Nevis (WINN): The Government of St. Kitts and Nevis, led by Prime Minister, the Hon. Dr. Terrance Drew has been engaged in a series of visits to public and private primary schools on St. Kitts in commemoration of the 39th Anniversary of Independence.

On Friday, September 09, the Ministers visited Primary Schools in the eastern and western zones of St. Kitts, before heading to the schools in the Basseterre Zone on Tuesday, September 12 for a “meet and greet” with staff and students.

The Cabinet officials have been dressed in support of the Independence National Colours Day initiative as they go through their visits.

The Ministers have been greeted with several acts of culture and talent ranging from African drumming to masquerades, exhibitions etc. The schools have also been showing true patriotism, with varying corners of the school buildings draped in the national flag and balloons representing the colours of the flag.The schools will also be engaged in their respective Independence Patriotic programs in the coming days.

So far, the county has acknowledged the colour green which means Fertile Land, yellow which means Year round-Sunshine and black which represents Our Heritage. The white and red days will be observed on Wednesday, September 14 and Thursday, September 15 respectively.