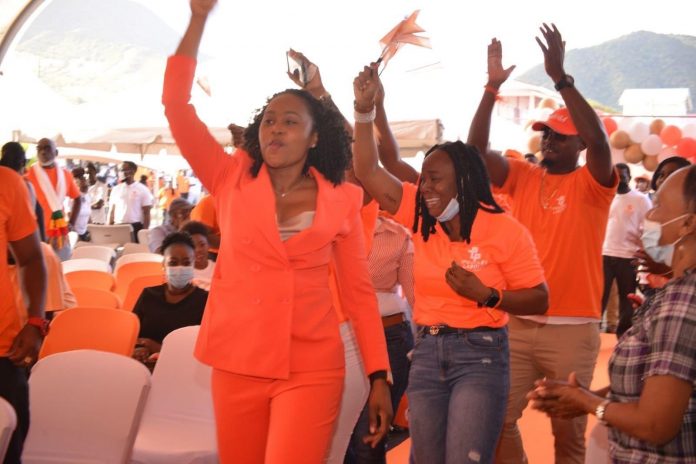 Byron-Nisbett spoke of the trust given to her by the constituents of West Basseterre, who ensured that she was given the opportunity to serve in public office following the 2020 General elections.

Byron-Nisbett serves as the Minister with responsibility for Health, Information, Communication Technology, Entrepreneurship, Entertainment and Talent Development in the Government of St.Kitts and Nevis.

Outlined in her presentation were a number of projects, that according to Byron-Nisbett were commitments made and commitments delivered. She assured the constituents of West Basseterre that she will not become distracted, and vowed to protect their interest in the unity prosperity agenda.

According to Byron-Nisbett, she delivered for the people of Trinity Heights by ensuring that the water issues were corrected. Basketball players in West Basseterre now benefit from the new backboards erected at the Basketball Court in Lime Kiln. Having committed to improving the local environment, the minister declared that the drainage issues at the Joseph N France General Hospital and the sewage issues that were causing unsanitary conditions for the people of Lime Kiln are rectified. In the village of Laguerite, individuals and families received land titles and infrastructural development such as roads, electricity and water has begun in that area. “I am delivering for the people,” said Byron Nisbett.

Additionally, the Minister stated that she has and continues to deliver for the people of St Kitts and Nevis through her various ministries.

“Over the past year, we have continued the good fight to keep our people safe from the ravages of COVID-19, as your MP and Minister of Health. I worked tirelessly with our health officials to ensure we left no stone unturned in our fight against COVID-19.”

Minister Byron Nisbett used the opportunity to thank the 26,533 persons for heeding the call and being fully vaccinated; a contributing factor in ensuring that restrictions are lifted. She also assured that the health centres will be more visible about the services offered and regular free health screenings amongst other things, will continue.

The Minister also mentioned that significant strides are being made through Information Technology, as free Wifi access has been made available to all major communities in St Kitts and Nevis through the community centres, courtesy The Cable. This she said is “delivery for the people.

As it relates to the Ministry of Entrepreneurship, Entertainment and Talent Development, Byron-Nisbett expressed that this ministry focuses on the people and the development and enhancement of young creatives in the Federation.

“In the campaign of 2020, a commitment was made to our young creatives that they would get the support system within the Government that understands their specific needs. Through this Ministry, together with our creatives, we are building the industries of music and entertainment, film and photography, the arts such as theatre, performing, visual and innovation industries that will move St Kitts and Nevis into new territories; creating opportunities within these industries, that were once thought could only exist outside of the Federation. Most importantly, we are doing this together. Together, we are delivering for the people. Together we are delivering for the creatives.”

Minister Byron-Nisbett also disclosed that a number of projects are yet to be delivered. These include repairs and upgrades to various facilities at the Joseph N France General Hospital, such as upgrades to the kitchen, laundry, central sterilisation unit, central medical stores, the mortuary and pathology lab and building a new world class Psychiatric Ward. This work she said has been budgeted for 2022 and it has already begun. A mentorship programme for students and young entrepreneurs is also included in her upcoming plans. The St. Johnson Community Centre will soon be upgraded and should be completed by the end of the year, the Minister said. Minister Byron-Nisbett made a commitment to develop the Patsy Allers Playfield and also to work closely with the Minister of Human Settlement, the Hon Eugene Hamilton to ensure that more homes are built in Constituency number 3.

She added, “It is through my role as an MP and as a Minister that enables me to focus on the issues that matter, focus on delivering for you the people of Constituency number 3 and the people of our great country. My focus is on developing our country, investing in our people and delivering on all the commitments I made to you in my election campaign.”