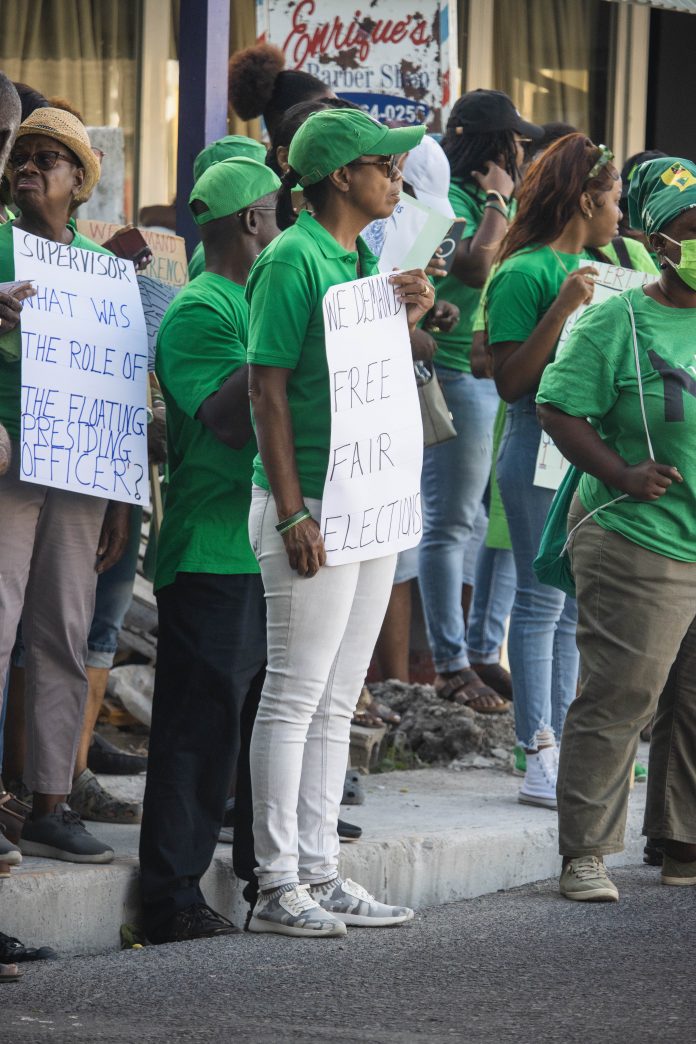 St Kitts and Nevis (WINN): The Nevis Reformation Party held a peaceful protest outside of the main gate to the Elquemedo Tonito Willett Park whilst the Inauguration Ceremony for the new Nevis Island Assembly Cabinet was ongoing on Sunday afternoon, December 18, 2022.

Leader of the Nevis Reformation Party- Dr. Janice Daniel Hodge speaking at the protest, alleged that there were a number of irregularities on election day- December 12, 2022.

Daniel-Hodge stated “Based on what has been revealed, subsequent to the elections and before the election results were revealed, the elections were not free and fair. There were a number of irregularities that contributed to much suspicion, much mistrust and the general sense that the current Government right now, did not win the election free and fair and so we’re asking that if we had free and fair elections, the outcome would be different. When we look at the number of people who voted, when we look at the way the election results were trending, it is fair that the people of Nevis were ready for a change and unfortunately, based on what has come out, based on the long delays in getting the results, it is clear for everyone to understand that the results and the outcome, is not what the people of Nevis wanted and what they voted for.”

The NRP Leader on Friday, December 16, hinted that the party will challenge the election results in the court on suspicion that the results were tampered with. She said the NRP is hopeful that the court will be fair and that the outcome would be different; as per the wishes of the people.

Meanwhile, the lone NRP male Candidate- Mr. Rohan Isles commented on the election saga and declared to the sitting Government, that they will not have an easy time in Cabinet.

“We are always willing to accept defeat in whatever the case is; but we found right after that was that there were some irregularities that happened during the day and consequently as we observed the count during the night. We have come here really to demonstrate and show the people of Nevis that voted overwhelmingly for us- cause we are comfortable in the knowledge that we won the election on the ground and quite a number of overseas voters who came would have supported us as well; we just want this Government to know that they are not going to have an easy time in Government because we believe there were some illegalities that occurred during the election period and the observation of the count.”

However, Brantley in his inauguration speech, mentioned that “the election was free and fair” and that “the results were reflective of the true will of the people of Nevis.” Brantley therefore called for an end to the politicking and gave the assurance that his Government will serve all the people of Nevis, including those who support the opposition.

“Brothers and sisters, the word minister is Latin and when translated, it means attendant or servant. I, therefore, thank the people of our beautiful island for once again giving me the mandate of being their chief servant and I pledge to do so diligently and faithfully. The people have spoken and they have done so eloquently and loudly. They have chosen hope over fear, purpose over discord, stability over chaos. Today I proclaim an end to the electioneering, the rancour and the petty politicking. Elections are now behind us. Now, we must get down to the task of governing. As the scripture puts it, “the time has come to put away childish things.” It is time for us to work together, aspire together and prosper together. It is time for us now to build Nevis together” said Brantley.

Brantley added “While the election might have given me a mandate to lead, it was not a mandate for arrogance, conceit, self indulgence or self aggrandisement. I want to assure all Nevisians, especially those who voted for my opponent, that their views, opinions, advice and criticisms will be welcomed and will always be given due consideration. I am the Premier for not only those who voted for me, but for all who call Nevis their home. Though we have won the majority of seats and the popular vote, we were not given the licences to victimise or marginalise those who oppose us. We are forever mindful that democracy is the rule by the majority, but not at the tyranny of the minority. My Government will be a Government for everyone, regardless of their nationality, race, creed or political persuasion. By our deeds and words, we will manifest that our island is one Nevis under God, with one Government serving one people.”

Considering the NRP’s decision to challenge the 2022 election results, this brings to light a similar situation, where the CCM challenged the election results for Constituency Number 2 between Brantley and Hensley Daniel of the NRP following the July 11, 2011 Nevis Island Assembly Elections. One of the main issues disclosed by Brantley was the illegal removal of names of more than 200 voters from the electoral list by the incumbent. However, a successful judgement was secured for Brantley, as a ruling from Justice Lionel Jones declared the election results in Constituency 2 null and void.

Just over a decade later, the people of Nevis await another election petition case, where Constituency Number 2 is once again in confusion over election results. It is unclear however if the NRP will challenge the results in any other constituency.