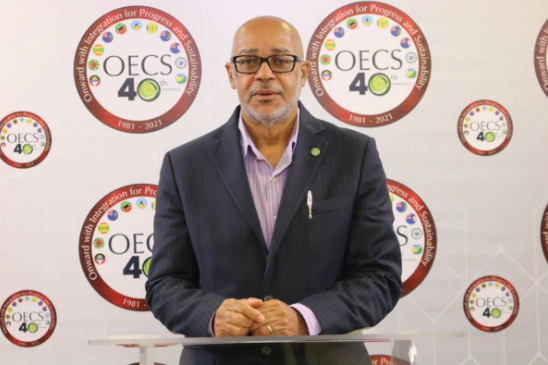 Monday, March 15, 2021 — The Organisation of Eastern Caribbean States (OECS) Commission hosted the official launch of the 40th Anniversary of the OECS, presenting planned activities to commemorate the June 18th, 2021 milestone.

The activities include a virtual Thanksgiving Service; a series of public sector consultations and business focused webinars; the launch of an OECS teachers resource booklet on regional integration; the launch of an OECS Youth Assembly; a development partners symposium; and the premiere of a special bi-lingual production on regional integration captioned “OECS for me” dramatized by the Che Campeche theatrical group.

Hon. Roosevelt Skerrit, Chairman of the OECS Authority delivered remarks at the launch, highlighting resilience and transformation during the region’s journey:

“This 40th year is a historical marker on a road of increasing convergence, greater anticipation and unyielding possibility. Notwithstanding the bad weather through which we have journeyed, there have been bursts of sunshine. Notwithstanding the pain we have endured, we have also enjoyed the blessings of rain and we have reached this milestone for one simple reason – we have always focused on the things that unite us rather than the things that divide us.”

Director-General of the OECS Dr. Didacus Jules, in his remarks, noted the need to celebrate past success but also look to the future:

“Our celebration of the 40th Anniversary of the Organisation of Eastern Caribbean States will involve not just looking back at the road already travelled but importantly also looking forward to the road ahead. In doing this we will be acknowledging the incalculable contributions of many who walked before us and the significant accomplishments on this journey to regional integration laid out in the road map of the Revised Treaty of Basseterre.”

The OECS was established on 18th June 1981 as an international, inter-governmental organisation dedicated to regional integration in the Eastern Caribbean. Seven Eastern Caribbean countries signed a treaty agreeing to cooperate and promote unity and solidarity among the Members, known as the Treaty of Basseterre, named after the city in St. Kitts and Nevis where the agreement was signed.

More information on OECS and the upcoming activities is available on the OECS website www.oecs.org and OECS social med

WhatsApp
Facebook
Twitter
Linkedin
Email
Print
Previous articleTechnology is at the Forefront of Primary School Education in St Kitts
Next articleCTO: Tourist Arrivals Down by 60-80 Percent In 2020