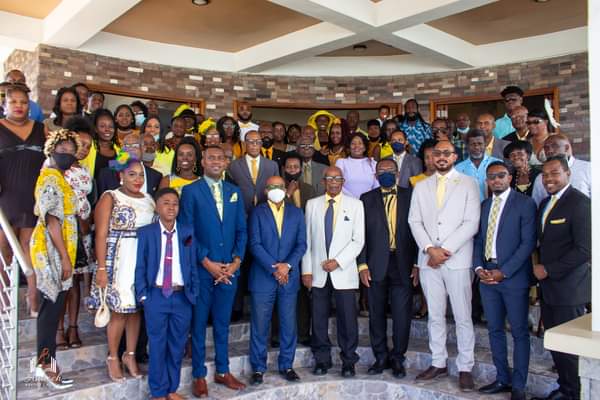 Richards, in giving remarks, said the party was formed on January 19th 1965 and adopted as its theme, “Putting People First”, a principle that continues to guide the party today. He also believes that it’s out of that principle that the People’s Action Movement has been able to make such a profound difference on the landscape of St. Kitts and Nevis; through social development, economic development, political development and the general development of citizens.

The party leader also outlined some of the accomplishments of the People’s Action Movement under a government led by The Honourable Dr. Kennedy A. Simmonds in the 1980s. These include the abolition of the Personal Income Tax, payment for the former sugar lands, diplomatic relations with Taiwan, the first female to contest a general Elections in St.Kitts and Nevis, Ms. Mary Charles, as well as the first female parliamentarian, Dame Constance Mitcham. Richards recalled two major local and tourist hubs, Port Zante and the South East Peninsula which were both constructed under the People’s Action Movement Government. The Citizenship by Investment Programme, Schools Meal Programme, the S.E.L.F Programme, a telecommunications company known as FLOW today and The Cable were also established under a People’s Action Movement government.

According to Richards, St. Kitts and Nevis became an independent nation under the People’s Action Movement and publicly recognised the man who led the islands into Independence.

“Pastor Connor said in his remarks, that perhaps the two biggest achievements were Port Zante and the South East Peninsula; I beg to differ. Exactly 8 months from the 19th of January, the 57th anniversary of the People’s Action Movement, this Federation will be celebrating its 39th anniversary of Independence on 19th September. We became Independent under a Government of the People’s Action Movement and for me, that is the biggest achievement as a people. It meant that we took control of our destiny. We took control of our affairs. We released the shackles of colonialism,” Richards stated.

Minister Shawn Richards, therefore, expressed gratitude to the People of St. Kitts and Nevis for their continued support.

Some other activities for the week include Constituency Day, all day on Tuesday, January 18 and Open Day at Party HeadQuarters on Wednesday, January 19 at 6 pm.