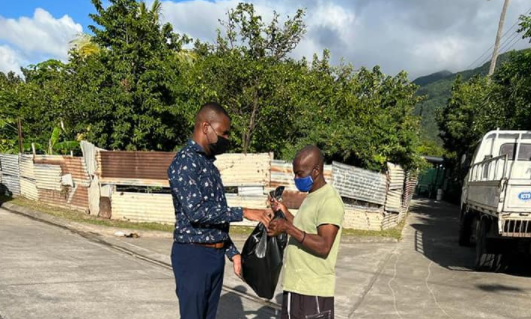 St. Kitts and Nevis (WINN): The People’s Action Movement conducted a ‘Constituency Day’ initiative to mark its 57th anniversary. Under the theme, ‘PAM57:Keeping Through to Our Vision’ the Constituency Day is one of several activities planned.

On ‘Constituency Day’ each constituency representative was tasked with leading some form of community outreach or event.

Minister of Education, Hon. Jonel Powell explained to WINN FM about the objective behind ‘Constituency Day.’

Minister Powell said, “The Constituency day forms part of the week of activities put together by the People’s Action Movement in celebration of it’s 57th anniversary, which is celebrated today, January 19th. It was really just a day identified, whereby, we would do and when I say we, the party through its various arms, candidates, representatives would just do something extra special within the constituencies and so candidates in particular, would have been out in their constituencies doing community outreach.”

In addition, the Minister said the initiative was very impactful, as the various ministers and party representatives went out into their constituencies, and gave insight into what is done on a regular basis. He said, it is important that people understand and appreciate what is being done from a party standpoint, as it’s not just about election time; but more about fulfilling the mandate of community outreach and putting people first on a daily basis.

Constituency #1, East Basseterre, engaged in a clean up of Newtown Bay, removing plastic waste which was led by party candidate Natasha Shanny Grey-Brookes.

In Constituency # 2, Minister Jonel Powell distributed care packages to the elderly and party bags to the children.

It was a double celebration for Hon. Minister Powell who shared his birthday with the Party.

The Hon. Lindsay Grant visited the Verchilds High School and the Old Road Daycare Center and donated dispensers. The Minister also took to Constituency #4 to show appreciation to the constituents.

Leader of the People’s Action Movement and area representative for Constituency #5 The Honourable Shawn K Richards delivered care packages to 57 members throughout his Constituency in celebration of the party’s 57th Anniversary.

In Constituency #6, fruit baskets were presented to several constituents; while the Hon. Eugene Hamilton, parliamentary representative for constituency 8 visited several homes throughout his constituency, including visits to amputees in the area and grieving families.

No outreach activity was done in Constituencies 3 and 7, but, as told by a member of the PAM executive, the matter will be discussed in the next party meeting.