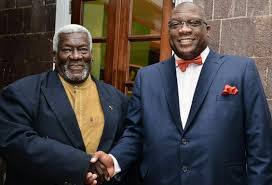 Cecil Rock was a proud son of the soil of our beautiful twin island Federation of St. Kitts and Nevis. He was a popular businessman, social commentator and a cultural icon. He was one of the first locals to own and run a bar at the Robert Llewellyn Bradshaw International Airport. He later moved his business to the tourism hub at Port Zante.

He was a regular calypsonian in the Calypso Tent during Sugar Mas. He enjoyed being the
centre of attraction, especially when he appeared on stage. His performances and entertaining stage presence, persuaded organizers to place him nearer to the end of the show. He often joked that, “the people came to see me”. In 2011 he won the title of „King of the Tents‟ and became known as King Rock-a-fella. This win was a significant and momentous one as his song “Stay In Yuh Lane” became very popular amongst the people. His songs were often created to a slow-tempo beat as he desired for his lyrics to be heard. His famous ad-libbing entertained live audiences wherever and whenever he performed. It was often said, “Rock-a-fella never sing any of his song lyrics twice, something always ah change”. He was also known to his associates as a comedian extraordinaire.

As much as he enjoyed entertaining and serving the people, he enjoyed dabbling in the politics of the Federation. His voice was well known on various call-in programmes, where any form of political debate occurred. He had initially been a supporter of the St. Kitts-Nevis Labour Party, but over the years he gave his loyalty and support and had full confidence in Dr Hon. Timothy Harris‟ led Peoples Labour Party (PLP). He believed that under the Stellar Leadership, Fiscal Management and Good Governance of the PLP, many good things has happened for the people in the Federation. Cecil Rock departed this life on Wednesday 21st September 2022. His contribution to the creative arts and tourism sectors will always be cherished. Our National Political Party Leader, Dr. Hon. Timothy Harris, the National Executive, our members and supporters of The Peoples Labour Party are greatly saddened of the passing of Cecil Rock from this world. We do convey our deepest sympathies to his family, his friends, his fellow calypsonians, the Sugar Mas Family and to all the good people of St. Kitts and Nevis.

May his soul rest in eternal peace.