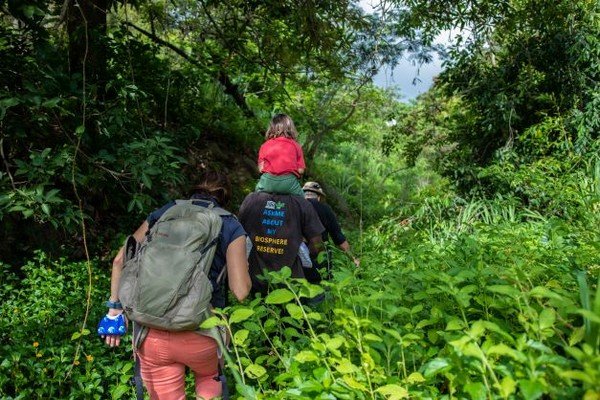 On August 27, 2021, MAB assessed the Cayon River Ghaut in an effort to further the work being done by the SMBR in relation to biodiversity, climate protection, and securing cultural heritage. During a recent interview, the Project Coordinator for St. Mary’s MAB, Mrs. Telca Daniel Wallace shared some insight in relation to the ongoing project.

“The SMBR is a part of the World Network of Biospheres. The reason why the area is special is because of all the entities that it houses in that small area, which includes the nesting of endangered species of turtles; the north and south reef where persons harvest sea moss also makes up part of the SMBR as a natural spawning ground for marine life. In the land part of the SMBR, we have historical and cultural assets; we also have endemic species of birds and plants that are only found in that particular area of the island. As you may know, in the SMBR there are churches that go back generations that have history. And we also have the historical sugar estates of Hermitage and Spooners located in the SMBR,” said Project Coordinator Mrs. Telca Daniel Wallace.

Mrs. Daniel Wallace also indicated that the goal of the assessment of the Cayon River Ghaut is to get a clear understanding of the situation affecting the waterway in the Cayon area. As part of the United Nations 2030 Sustainable Development Goals (SDG), clear water and the protection of waterways are fundamental pillars, thus, the protection of the Cayon River Ghaut as a waterway in the SMBR and the Federation as a whole is pivotal. MAB intends to clean the entire area in an effort to protect marine wildfire, to educate and inform residents of the historical importance of the area, and to secure the waterways for the use of future generations.

The UNESCO St. Mary’s Man and the Biosphere (MAB) Committee’s task of cleaning up the Cayon River, Hermitage Estate, and the Hermitage and Keys Bay areas is ongoing amidst the setbacks caused by the current COVID-19 pandemic in St. Kitts and Nevis. Interested persons can contact St. Kitts and Nevis National Commission for UNESCO to be a part of the ongoing clean-up works and future projects.