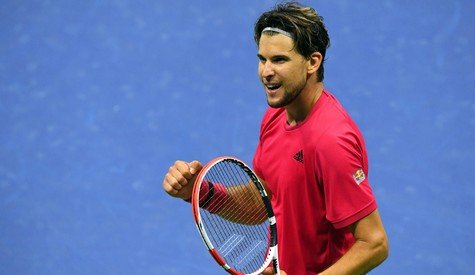 NEW YORK (AP) — A U.S. Open unlike any other finished unlike any other — with an unprecedented fifth-set tiebreaker as Dominic Thiem became the first man in 71 years to win the final after dropping the opening two sets.

So close to defeat in a nearly empty Arthur Ashe Stadium — fans were banned because of the coronavirus pandemic — Thiem slowly but surely turned things around against a faltering Alexander Zverev and pulled out a 2-6, 4-6, 6-4, 6-3, 7-6 (6) victory at Flushing Meadows for his first Grand Slam title.

The match ended with both men fighting leg cramps and, clearly, nerves.

“Somehow,” said Thiem, a 27-year-old from Austria, “the belief today was stronger than the body, and I’m super happy about that.”

When a backhand from Zverev landed wide on the third championship point, a weary Thiem dropped to his back way behind the baseline and covered his face with his hands. When he arose, he was met by Zverev, who walked around the net to clasp hands, then embrace his friend and foe, two sights rarely seen in this era of social distancing.