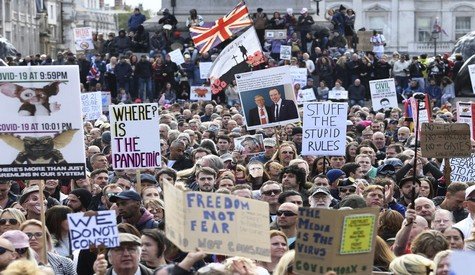 LONDON (AP) — Police moved into London’s Trafalgar Square on Saturday afternoon to break up a protest against restrictions imposed to slow the spread of COVID-19 after demonstrators ignored warnings to observe social distancing rules.

Thousands of people, most of whom weren’t wearing masks, crowded into the iconic square to hear speakers who criticized government-imposed restrictions as an overreaction to the pandemic that needlessly restricted the public’s human rights and freedom of expression.

The Metropolitan Police Service had said before the event that officers would first encourage protesters to follow social distancing rules, but that they would take enforcement action if demonstrators failed to comply. As the event began, officers were visible around the perimeter of the square, but they didn’t move into the crowd for about three hours.

The demonstration comes as Parliament prepares to review COVID-19 legislation and the government imposes new restrictions to control the disease. Some lawmakers have criticized the government for implementing the rules without parliamentary approval.

Speakers at the rally denied they were conspiracy theorists, arguing they were standing up for freedom of expression and human rights.

Dan Astin-Gregory, a leadership trainer, acknowledged the deaths and suffering caused by the pandemic, but said the response to COVID-19 has been out of proportion to the threat caused by the disease.