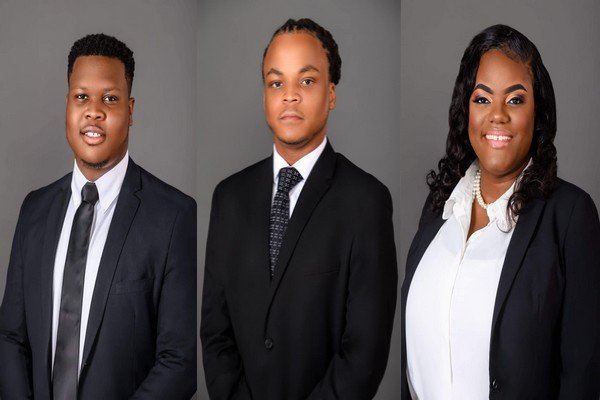 Azuree Liburd received the Hugh Hart Prize, which was awarded to students with the best performance in Legal Drafting and Interpretation and Landlord and Tenant Examinations with demonstrated involvement in co-curricular activities of the Law School.

Meanwhile, Kamau Grant earned nine awards and was also listed on the Principal’s Roll of Honour for the academic years 2020-2021 and 2021-2022 alongside two Jamaican Law students and a Law student from Trinidad and Tobago.

Grant received the Keith Stanford Sobion Memorial Prize, which was awarded to the students whose overall academic performance and contribution to student activities and interest in the Norman Manley Law School was outstanding; and who are listed on the Principal’s Roll of Honour. The award is made to persons who have achieved a minimum of 6 A’s over the two year period, having passed all prescribed courses at first sitting in this period.

Grant received the Sir Colin MacGregor Memorial Prize which was awarded to the most outstanding student over two years in the areas of academic achievement, interest in the Legal Aid Clinic, the Norman Manley Law School and discipline and attitude to society. He also received the Raphael Codlin Memorial Prize. Local Law firm Kelsick, Wilkin and Ferdinand awarded a prize to Grant as the best overall overseas student over two years.

Additionally, Grant received the Michael Nunes Memorial Prize as well as the K.C Burke Memorial Prize awarded to the student with the most outstanding performance in Law of Association. He received the Williams, McKoy and Palmer Prize awarded to the final year male student who achieved a minimum of 5 A’s over two years and was involved in the co-curricular activities of the Norman Manley Law School.

The Hugh Hart Prize was also awarded to Grant for best performance in Legal Drafting and Interpretation and Landlord and Tenant Examinations with demonstrated involvement in co-curricular activities of the Law School.

Grant in a social media post confirmed his achievement as a Lawyer. He noted “Five years ago I set out to university to pursue further studies in Law which I thought at that time was my passion. The years especially these last 2 were long, exhausting and presented many challenges. However, I have a great support system made up of family and friends that ensured I never wanted for anything.”

Grant shared that he will be furthering his legal studies in pursuit of a Master of Laws degree in Human Rights Law at University College- London.

He said, “Over the course of this academic year, I will pursue what I confirmed was my real passion: Public Law, particularly Constitutional Law, Administrative Law and Human Rights Law. The knowledge I gain here I hope will ensure the benefit of my country and the wider region.”