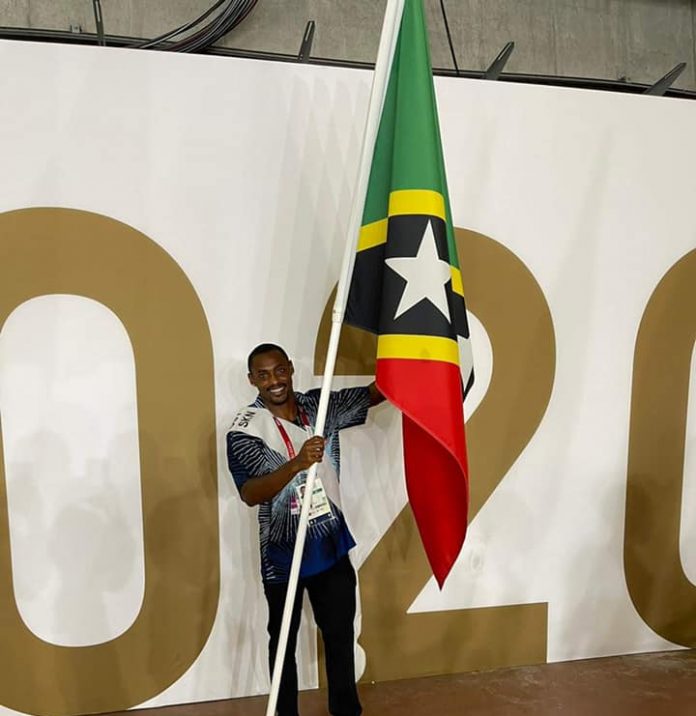 The native Sandy Pointer shared that his constituency representative and former Deputy Prime Minister Shawn Richards was responsible for pulling the funding that supported him while he was abroad.

“Ghost put something in place for me when I was in Canada in 2013-14, and then after 2015 when “pardna” (Richards) did not renew what Ghost did for me, I had to move to Jamaica… because I couldn’t pay my rent and so no more. I had to move because expenses started hitting me.”

The olympian said the program assisted him while away in Canada facilitated by past Minister of Sports and Representative for Constituency No. 4 Mr Glen “Ghost” Phillip of the St. Kitts-Nevis Labour Party (SKNLP).

Rogers referenced a separate program to support some track athletes locally known as “De Relay Boys”, a program separate and apart from the funding he indicated he was receiving through Phillip.

“Delwayne Delaney did a proposal for “De Relay Boys” for the whole relay team that had nothing to do with me… He did a proposal to say “De Relay Boys” training up to Olympics, and we trying to qualify, and we need “x” amount of money for like five to six members. Shawn [added] a whole female relay team. Shawn [added] whole distance runners, all these people went on relay boys proposal… when we did all the preparation all the groundwork.”

The proposal was to support a specific number of athletes to race and represent the Federation in relay events and eventually qualify for the Olympics. Rogers suggested that the proposal was then changed by Richards, who was the then Minister of Sports, to accommodate other athletes.

Richards in a town hall meeting shared on May 26 that some 14 athletes cumulatively received EC$200,000 in assistance.

On May 25, SKNLP Candidate for Constituency No. 5, Kenneth “Kenny” Douglas, reiterated Rogers’ claim that his funding was cut during the party’s May 25 town hall meeting.

“I don’t want to do like the former Sports Ministers, The one from No. 5 and the one from No. 2, because we have a three-time Olympian in our community of Sandy Point. Labour made a program in 2015 to help our athletes out there, and can you believe that our representative pulled the funding from under this young man when he was outside in foreign land. This is an ambassador of St. Kitts and Nevis; he pulled funding from this guy.”

In a recent town hall meeting, Richards was asked a question concerning the funding being pulled, which prompted Rogers to speak out on what the former Minister said.

Richards said, referencing Douglas, “I’ve heard that the same person has made a claim that I stopped some sort of money that Jason Rogers was receiving. I did not stop any money for Jason Rogers. Jason Rogers would have reached out to the Ministry on other occasions to receive assistance, and assistance was given to Jason Rogers, and I can go back into my emails, find the correspondence with Jason Rogers and speak specifically to that.”

Rogers made several other remarks contesting the representation of his constituency received from its representative as the campaign trail continues for the snap election expected within the next 70 days.