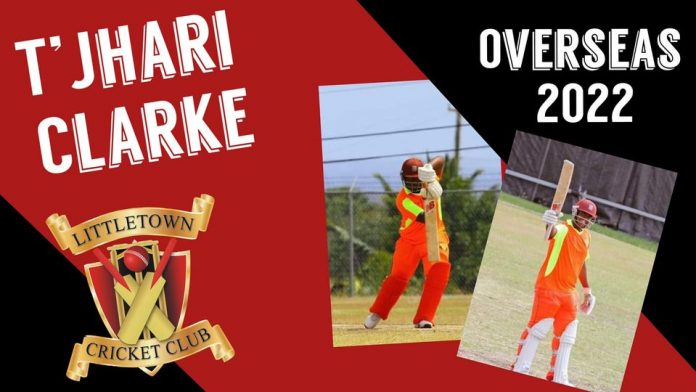 News received indicates that exciting youthful allrounder, T’Jhari Clarke, will leave Nevis this coming Wednesday to travel to the UK, where he is set to represent the Littletown Club in the English leagues.

A posting on the Littletown’s Facebook page indicated the following:

“We are delighted to be able to welcome T’Jhari Clarke to Littletown CC as our overseas player for 2022. Following on from the disappointing news that our previously announced overseas player Hamza Qasim, getting injured a couple of weeks back, we have acted fast in bringing in a replacement in the shape of West Indian T’Jhari.

T’Jhari, a right-handed top-order, hard hitting batsman comes from the Island of St. Kitts and Nevis in the West Indies. As Captain of the “Highlights International Cricket Team”, a local 1st division level club in Nevis, he also bowls useful medium pace.

During the last couple of years playing 1st division cricket, he has played alongside West Indian International wicket keeper batsman Jahmar Hamilton, and Jeremiah Louis, a bowling all-rounder who played for the West Indies B Team and Leeward Islands Hurricanes – both of whom are also Caribbean Premier League franchise players.

T’Jhari already has a lot of experience playing with top level first-class cricketers at club level. Most recently, he was awarded man of the match in a T20 finals tournament in Nevis and won awards for most sixes in the finals, hitting a total of 87 runs in only 50 balls, bringing success to his club.

T’Jhari is looking forward to his first stint in the UK as an overseas amateur and playing with the lads at LCC.

We can’t wait to see what he brings to the side and the club in the next few months.
Go well T’Jhari and welcome to Littletown! Wishing you a successful season packed with lots of runs and wickets.