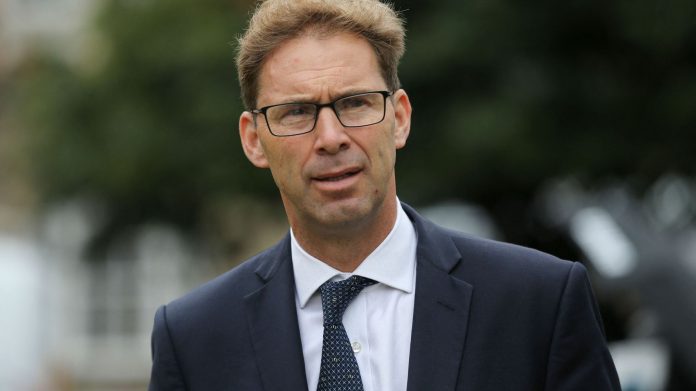 (Sky News) Conservative MP Tobias Ellwood says he will submit a letter of no confidence in Boris Johnson, piling more pressure on the prime minister over partygate allegations.

The senior Tory, who is chair of the Defence Select Committee, told Sky’s Kay Burley that he would send his letter to Sir Graham Brady, chairman of the 1922 Committee, later today.

Mr Ellwood said it is “time to resolve this” as the Conservative Party is “slipping into a very ugly place”.

It comes as the prime minister attempts to fight off a growing rebellion over the partygate revelations, with the Metropolitan Police investigating 12 gatherings during COVID restrictions for potential breaches of regulations.

Meanwhile, Number 10 has refused to comment on new reports that reveal details of lockdown parties Mr Johnson is alleged to have attended.

In fresh claims, two newspapers say the PM attended a party in his flat and also went to separate leaving dos.

Ellwood calls on PM to ‘take a grip of this’

Mr Ellwood’s comments come after another Conservative MP, Peter Aldous, said on Tuesday that he would be submitting a letter of no confidence.

Explaining why he is also putting a letter in to Sir Graham, Mr Ellwood said it is “just horrible” for Tory MPs to “continuously have to defend this to the British public”.

“I don’t think the prime minister realises how worried colleagues are in every corner of the party, backbenchers, and ministers alike, that this is all only going one way and will invariably slide towards a very ugly place,” he said.

“I believe it’s time for the prime minister to take a grip of this; he himself should call a vote of confidence, rather than waiting for the inevitable 54 letters to be eventually submitted.

“It’s time to resolve this completely, so the party can get back to governing, and, yes, I know the next question you will ask, I will be submitting my letter today to the 1922 Committee.”

‘We’re better than this’

Mr Ellwood hit out at the current strategy from Number 10, accusing the government of prioritising short-term survival.

He criticised what he said were recent “rushed policy announcements”, including the Royal Navy taking over responsibility for policing migrants crossing the English Channel.

“And attacking this week Keir Starmer with Jimmy Savile… I mean, who advised the prime minister to say this?” Mr Ellwood added.

“We’re better than this, we must seek to improve our standards and rise above where we are today.”

Facing MPs as he delivered a statement on the Gray report, Mr Johnson accused Sir Keir, the Labour leader, of failing to prosecute sex offender Jimmy Savile when he was director of public prosecutions.

Victims of Savile have called on the PM to withdraw the discredited claim, which Sir Keir has described as a “ridiculous slur peddled by right-wing trolls”.

Also speaking to Sky News, former education secretary Justine Greening said it is “up to Tory MPs to decide what to do” as it is clear that Mr Johnson “isn’t going to resign”.

How likely is a no confidence vote?

A handful of Tory MPs are understood to have handed in letters of no confidence following the lockdown events in Downing Street and Whitehall.

The only person who knows the true figure is Sir Graham, who does not publicly say how many letters have been received.

A total of 54 letters – 15% of the parliamentary party – are needed to trigger a leadership vote.

If Mr Johnson were to win such a ballot, he would be immune from another leadership challenge for a year.

Were he to lose, he would have to resign and a successor as party leader and PM would be chosen.