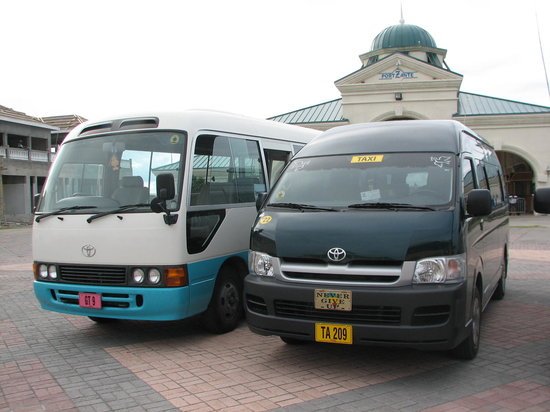 St. Kitts and Nevis (WINN): The Ministry of Tourism and the St.Kitts Taxi Association met on Monday, January 24, in an effort to smooth over critical issues impacting the transport community.

The meeting was organised after some Tour Operators in St. Kitts expressed frustration after experiencing reduced bookings and new dispatch strategies.

On Tuesday, January 25, the Minister of Tourism, The Honourable Lindsay Grant confirmed the meeting occurred and provided insight into some of the discussions.

“One of the major issues that they were concerned about was the fact of the dispatching and the process of dispatching which has always been a very ticklish position throughout the years,” Minister Grant said.

“Over the last year, I think we changed the operation of it and it appears as though the Taxi presidents and the fraternity wasn’t very happy with it. So, we sat down with them yesterday to see where we could meet them halfway down the road, in terms of a resolution. I think we ended on a high note in that we tweaked it a bit so that the dispatching works for them. They have a better understanding of it and they’re more appreciative of how it operates and so we are satisfied that going forward, the relationship with the taxi drivers and tour operators and the Ministry of Tourism, the St.Kitts Tourism Authority will be better.”

WINN FM first heard of the issue last week when Sylvester ‘Socrates’ Hodge, President of the St.Kitts Taxi Association made a public claim that the Tour Operators situation was a dire one and requested a meeting with the Ministry to address core issues.

Hodge said that the current booking process and arrangements at the Port Zante Cruise port is really hurting the majority of tour operators who go to the cruise terminal faithfully and repeatedly without getting a job over several days.

Other Tour operators support this claim. Some said that only a small fraction of individuals or agencies are getting an opportunity for an income when cruise ships arrive.

WINN launched its own deep dive into the story and our reporters visited Port Zante last Saturday when a few Tour Operators voiced their concern.

“It is lopsided, very much lopsided. Even a blind who has a little glimmer of sight will be able to see the disparity and something has to be done, said one Tour Operator who asked to remain anonymous.”One of the demise is because of our disunity. Greed has crept into the individual taxi operator. That is what is confronting us as a whole as a taxi fraternity.”

This week (January 24-January 31) 13 cruise ships are scheduled to arrive at Porte Zante. These numbers suggest a strong rebound from the impact of the COVID-19 pandemic. However, a deeper look into the passenger capacity for arrivals, shows reductions in the amount of passengers coming off the ships to participate in tours and local offerings.

“The ships are coming, whether they are full to capacity or not, I don’t doubt that they are not full to capacity. It is only one percent or less than 1 percent of those involved in the business on the island are benefitting.”

The Tour Operator believes a collective approach to addressing the current challenges can find workable solutions for more operators, but this approach needs to be undertaken by the drivers and not just the government.

“It’s not the authorities, it is on us the taxi drivers collectively. We are stakeholders in the business and if we don’t lend our voices collectively, they (the government) are driven by us, because we are the ears on the ground. They (government) would implement things that we say believe it or not. If we stay disunited there is nothing they can do and this will get worse” he said.

“Collectively we are being pacified when we get a little sweetie but when the taste is out of our mouth, we cry about wanting another sweetie. We are not collective as to say we are all in this thing together. Not because you had a good day and you had a bad day, we all should be enjoying all the days in a more collective way,” said the anonymous Tour Operator.

He said, “The boats are coming in but they are not full to capacity and we need to understand that. The people getting the jobs went to workshops in Miami to get those jobs. Taxi drivers have up to 160 to 170 are already vaccinated but enough jobs are not there.”

Bridgewater said many Tour Operators are facing challenging financial times with some potentially losing their livelihoods. He blames other tour operators and authorities for painting a positive picture, without looking at the complexities of the situation.

“They are painting a picture where it is not right. They are giving the general public… that we are making monies. There have been a lot of foreclosures on their buses. Taxi drivers need something to be given back to them, especially those that are on, ones on the list (vaccinated) of the 170. It is important that they get duty free stuff or a stipend. The Minister of Tourism knows that the boats are not filled to their capacities but they are coming. When a boat’s capacity is three or four thousand and they only have one thousand and forty, they can’t share for 160 persons. That is where it gets difficult.”

Hodge and Bridgewater echoed similar sentiments of Tour Operators being unable to sustain their livelihood and meet the needs of their families.

Following Monday’s meeting, the Minister believes that clearer and improved communication can go a long way in solving these types of problems before they occur.

Grant said, ” It’s all about engagement and for us we’ve been engaging with them on a regular basis. We don’t like things to come to a head. We like to deal with it and resolve matters as we go along; so, we think that after yesterday’s meeting, we’re going to be better.”