Tourism CEO – “We are trying, we are really trying” 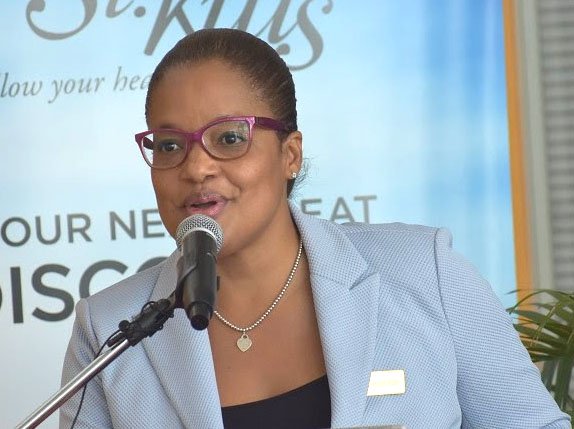 St. Kitts and Nevis (WINN): In response to claims by some tour operators of unfair practices, Tourism Authority CEO Raquel Brown asked stakeholders for understanding as cruise tourism returns to the Federation.

On Tuesday (Sept. 14), Porte Zante welcomed the Celebrity Equinox with a reduced load of visitors. The capacity for the Equinox is 3,420 passengers; only 1,247 passengers arrived on yesterday’s trip.

“The vessel was not 50 percent, but we know that cruise tourism is in a phased reopening worldwide. It will take some time for both cruise lines, brands and for destinations to get back to the levels they previously were at,” Brown said during the September 15 broadcast of WINN’s Island Tea.

Celebrity Equinox was the first ship back to Port Zante in 18 months and signalled the restart of cruise tourism in the Federation.

Brown, during the interview, called the September 14 return a success. However, officials have stressed that this restart is a phased approach and should not expect a return to pre-COVID cruise tourism anytime soon.

“It’s not been easy because we’ve not been able to integrate back all of our stakeholders back into the tourism industry because it’s been very difficult. It’s a phased approach, just as we’ve had with stayover. Unfortunately, when cruise resumed in June, we did not resume. And there was going to be a phased approach, and we had hoped the Tourism Authority or the Ministry of Tourism, that by this time in September we’d have gone through the phased approach or trials along with the task force and the Minister of Health, and we would have had more persons working because we would have had, which we do have now, more persons vaccinated. Unfortunately, cruise did not resume in June.”

Brown responded to claims of unfair practices by a caller identifying herself as a tour operator on Island Tea on Tuesday.

The caller told of her personal experience and alleged unfair treatment and favouritism within the cohort of taxi drivers and tour operators.

Brown acknowledged that issues have occurred but pleaded for understanding and support from tourism industry stakeholders.

“We know there have been challenges. We know that everyone is not happy. Of course, it makes our job easier if over 5,000 persons that are in the industry get back to work. However, it’s a phased approach, and we’ve always said that. I’ve always said it in meetings to manage expectations, and it will be a phased approach. There are tour operators, taxi operators that have been working from as far back as October 31 at the airport… Yes, I know the airport is new compared to what the income-earning is at Port Zante for cruise.

It’s been a challenging time, but I asked what is the solution, because we also have to have things go very smoothly to incorporate, slowly to demonstrate to all of the cruise lines that we are capable of handling the number of cruise ship passengers as they come off. So we are starting back pre-2015 and pre-2012. We’re actually going back when sometimes there was a time in St Kitts when there was only one ship, and that’s very hard to fathom well over the last eight years; I have seen the benefit of how the tourism industry has grown.”

However, Brown stated that the Tourism Authority is not responsible for tours; that is left up to the cruise lines and their policies for operations and guest movement.

“There are requests made by the cruise lines as to what tours they would like. And we spent over a week, and many persons don’t know this, but I really have to see this to ensure that we were able to outline the protocols for independent tours. The tourism authority is not in the business of selling tours. We can never do that; that’s not our mandate. Our mandate is to promote, market, and to ensure product development. However, there is an issue as it speaks to how we ensure that we get persons back to work on earning an income, and it’s not easy, and I could never profess to be in the shoes of persons who are really struggling and suffering, but we are trying, we are really trying.

There’s a ship that came in with 1,247 persons, and we are gradually building this up… I said if we had started in June, we would not be here, more ships will be coming, and we’d be able to integrate more people. There is a discussion, as it says that, yes, they are travel approved, they are going to the same sites. We have to make guarantees for independent tours in terms of security, compliance, working also to secure Port Zante, to ensure that it was an environment that remained a bubble vaccinated tour. When we have bubble vaccinated sites or attractions, there is a level of security that each owner or operator must provide. It’s not an easy job. And so it makes it very difficult, and we are trying to work with everyone.”

Celebrity Equinox is expected to return to the Federation on October 5, with more calls anticipated in November.