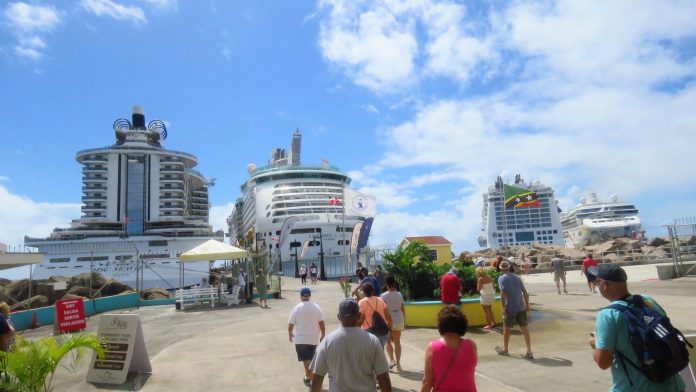 St. Kitts and Nevis (WINN): The tourist season is in full swing, and stakeholders at Port Zante, St. Kitts, are pleased with the return of visitors to the island, despite a few drawbacks.

Owner of Noble Jewellers, Mark Wani, told WINN FM that business is a bit slow, but he is optimistic that there will be improvement around the Christmas season into the New Year.

“Ship schedule is okay, but people don’t have the spending power yet. Possibly maybe 15 to 20 days, it’s generally going to be better,” said Wani.

An anonymous employee from another jewellery store said it was good to see Port Zante bustling with activity again. However, getting tourists to do business at the store was also very difficult. He said, however, that most tourists appear to be attracted to the businesses that sell souvenirs.

Meanwhile, a tour guide told WINN FM despite multiple ships docking at the port, bringing hundreds of tourists, there are times when it is very difficult to get a tour job. He stated, “It’s minutes to 11 already, and I [have been] down here since early this morning and ain’t get any business yet.” However, the tour guide mentioned that the situation had improved significantly compared to the last tourist season when minimal ships travelled to St. Kitts due to the COVID-19 Pandemic. He recalled cases where several weeks passed without some tour guides getting a single tour opportunity.

Additional feedback was solicited from other tour guides, but they all indicated that they were trying to attract some business whilst they had the privilege to do so.

The overall atmosphere at Port Zante was quite busy, and from WINN FM’s vantage point, the tourists appeared to be more interested in souvenir shopping and beach tours.

Three ships docked at Port Zante on Tuesday, December QA q06, 2022, while another vessel went to Nevis. Four ships, however, are scheduled to arrive on Wednesday, December 07, 2022, and five on Thursday, December 8, 2022.