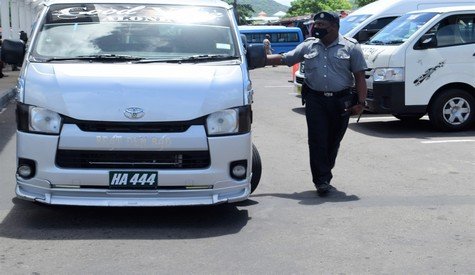 Head of the Traffic Department, Superintendent Trevor Mills, and other Officers from the Department have been frequently visiting the area to observe how the system is working and to assist with traffic-related problems arising out of it. He explained that it has been working well so far with respect to the buses queuing up. However, he added that there were some issues regarding congestion that the department was moving to address.

“So far I have seen some organizing of the buses queuing up and operating on a first come, first serve basis, however, there is concern for congestion in the area of the Bay Road, Lower Market Street and Westbourne Ghaut where there is a build-up of traffic from time to time. We hope, going forward, that improvements would be made with respect to these areas.”

He discouraged private motorists from parking for long periods of time in the area of the terminal and to use it for drop-offs and pick-ups only to ensure a smooth flow of traffic. At the end of the trial, a meeting will be held with the relevant stakeholders to discuss the way forward.

In contrast to the previous system, buses enter the terminal from west to east. There are loading areas which are located at the front of the queue – two on each side – where buses can exit once they are full. The areas for offloading are located at the back where buses can let passengers off after they enter the terminal. The middle section of the terminal is the designated waiting area for buses that are not in the loading line. Once passengers exit, the bus driver can proceed to the waiting area if they intend to make another trip with more passengers or exit the terminal if they do not. Additionally, east line buses will be able to go into the terminal and drop off and/or pick up passengers on the sea side. The system also allows for private vehicles to do the same.