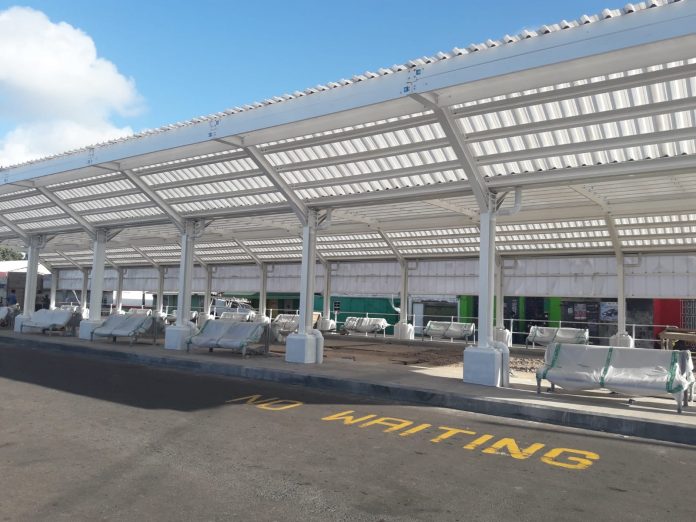 St Kitts and Nevis (WINN): The Police Traffic Department is appealing for road users to exercise patience in the area where the West Line Bus Terminal is under construction in Basseterre.

Traffic Officer Police Constable, Donaly Liburd-Chiverton on edition ‘Traffic Talk’, on WINN’s weekday morning show ‘Island Tea’, said drivers were not adhering to the ‘No Entry’ sign placed on the left lane coming from the west on Bay Road.

A temporary ‘No Entry’ sign on the Bay Road is restricting entry from the west, starting from Malone Avenue past the Basseterre Public Market to the Bus terminal, from 7:00 am to 1:00 pm.

Liburd-Chiverton condemned people’s lack of attention to the sign.

“Every Saturday morning we’re still having the issue with persons driving and not seeing the sign. Well, they say they are not seeing the sign. And giving…25 to 30 tickets within that small area between 7 [am] and 1 pm doesn’t make much sense to me. And, so, we are asking the general public, to take note that there is a sign. It’s a temporary sign and so we’re asking you to be law-abiding citizens and follow the directions please.”

This plea follows a similar one made by Constable Liburd-Chiverton on another edition of “Traffic Talk”.

Constable Liburd- Chiverton also appealed to bus drivers to adhere to the legitimate bus routes already established. It is an offense to drive outside the recognized bus route while conducting business. There have been reports, the Traffic Officer said, of omnibuses traveling on Fort Thomas road, colliding with vehicles, and leaving the scene without speaking to the proper authorities.

“…We are asking the persons who are driving buses to be mindful… More so, in particular, the Western bus route, persons are still traveling down Fort Thomas road causing accidents and not …acting responsibly. Meaning, they drive down, they hit somebody’s vehicle and they keep driving, no courtesy to stop and say ‘okay sir you know I would take care of the damage, I would call the traffic department, I did not see so and so’, or whatever the situation might be; whatever your excuse might be,” Liburd-Chiverton continued.

Buses are also only allowed to travel outside of the legitimate bus route on Saturday mornings from 7 am to 1 pm. The bus route is outlined as follows:

“Persons, bus drivers who are in the habit of driving along Fort Thomas Road, when you get by “Five Ways” you keep going down, that is an offense. Since then… we are in the process of putting two stop signs so that busmen can no longer say they don’t know.”

Liburd-Chiverton also made mention of the frustration drivers may be feeling because of this travel restriction but that is linked to the completion and opening of the West Line Bus Terminal. No date has been announced for that opening.