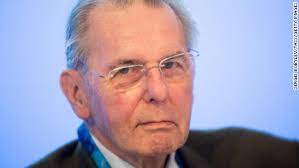 In 2005 he announced the awarding of the 2012 Games to London, with Coe having led the UK capital city’s bid.

Rogge, who was an orthopedic surgeon with a degree in sports medicine, was married to Anne, and leaves a son, a daughter and two grandchildren.

“I am beyond sad to hear the news of Jacques’ passing,” Coe said. “I wrote to Jacques and Anne two weeks ago to tell them that all of us at World Athletics missed them at the Tokyo 2020 Olympic Games. I said it wasn’t the same being in the Olympic stadium watching athletics without them.

“I have a mountainous gratitude for his part in the seamless delivery of London 2012. No Organizing Committee could have asked or received more. He was passionate about sport and all he achieved in sport and beyond was done with common decency, compassion and a level head. We will all miss him.”

After his career as an athlete, which included becoming a Belgian rugby international, Rogge became President of the Belgian and European Olympic Committees, and was elected President of the IOC in 2001. After his IOC Presidency, he also served as a Special Envoy for Youth, Refugees and Sport to the United Nations.

“First and foremost, Jacques loved sport and being with athletes – and he transmitted this passion to everyone who knew him. His joy in sport was infectious,” said Thomas Bach, who succeeded Rogge as IOC President in 2013.

“He was an accomplished President, helping to modernize and transform the IOC. He will be remembered particularly for championing youth sport and for inaugurating the Youth Olympic Games. He was also a fierce proponent of clean sport, and fought tirelessly against the evils of doping.

“The entire Olympic Movement will deeply mourn the loss of a great friend and a passionate fan of sport.”

“Dedicating his life to the Olympic Movement, he was very special in his human attitude towards others, incredible love for athletes and understanding of the youth.”

Among others to pay tribute to Rogge was Moroccan middle distance great Hicham El Guerrouj, who wrote: “With a heavy heart, I pray for the eternal repose of Jacques Rogge, the former president of the IOC. RIP.”

While the USA’s 1968 Olympic high jump champion Dick Fosbury wrote: “We shall never forget the work accomplished by this gentleman, former IOC President Jacques Rogge, a three time Olympian Sailor. It was an honor to know you, sir.”