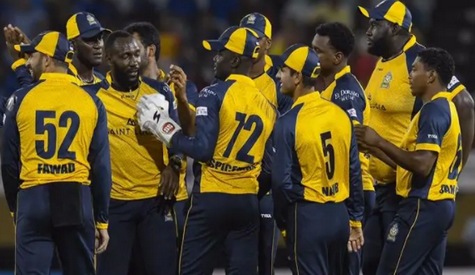 The result seemed a foregone conclusion when leg-spinner Hayden Walsh’s three-wicket haul sent Zouks tumbling for 92 off 18 overs — the joint second lowest total in the franchise history and lowest in this year’s tournament.

However, Tridents then showed precious little intent as their run chase meandered aimlessly, and were three runs short of their target at the end to plunge to their second defeat in as many days and their fifth in seven games.

They were suffocated by Zouks’ slow bowlers, leg-spinner Javelle Glen grabbing two for 11 from his three overs and left-armer Zahir Khan along with off-spinners Mohammad Nabi and Roston Chase combining to dry up the scoring in miserly spells.

Tridents were still in the contest with nine runs needed from the final over but Chase held his nerve and conceded only five, to complete a quite remarkable turnaround for Zouks.

With 10 points from five wins, Zouks lie second to leaders Trinbago Knight Riders, and on the verge of a spot in the final four.

Sent in on a turning Queen’s Park Oval pitch, Zouks struggled from the outset when they lost Rahkeem Cornwall (6) to the fourth ball of the morning and Andre Fletcher (6) in the following over, to slump to 12 for two.

Leniko Boucher (18), in his first match of the tournament, then paired with Chase (14) to post the best stand of the innings as they added 30 for the third wicket.

Mis-stumped on 12 by Shai Hope in the fifth over, Boucher perished in the following over when he was bowled by Walsh missing a badly timed cut.

When Walsh bowled Chase with a full length delivery in his next over, Zouks were tottering on 50 for four in the ninth over and there was no recovery as the last eight wickets tumbled spectacularly for just 42 runs.

There was no sign of the drama to come when Johnson Charles punched four fours in 39 from 42 deliveries in a 32-run stand with Hope (14).

Seamer Kesrick Williams (2-12) got the breakthrough when he brought one back sharply to hit Hope in front in the sixth over, extending the right-hander’s wretched run of form that has seen him scrape 113 runs from seven innings.

And even when the in-form Kyle Mayers was beaten and bowled for two by a beauty from Zahir in the seventh over with five runs added, Tridents were still hot favourites to take full points.

Still, the task remained a simple one with Tridents needing 22 runs from the last five overs but nerves became frayed when Corey Anderson (11) was bowled by Nabi in the 18th and Rashid Khan (2) picked out long on with Glen in the penultimate over.

Chase was then brilliant in the final over, keeping Ashley Nurse (12) scoreless off the first ball and then getting him to hole out to mid-wicket off the second.

Raymon Reifer then missed a swipe at a high wide full toss that was there for the taking before punching a couple to backward point and scrambling a bye off the fifth.

With six runs needed from the final ball, Nyeem Young spanked a low full toss to deep cover but it was not enough to save Tridents.