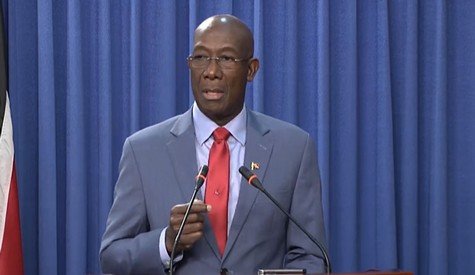 PORT OF SPAIN, Trinidad (CMC) – Prime Minister Dr Keith Rowley has raised the possibility of the vaccine to combat the coronavirus (COVID-19) becoming mandatory to the population should the virus mutate to the point of posing a serious threat to Trinidad and Tobago.

“This is an international conversation which is very much a local conversation. What the government has done is to respect that right to choose what you do with your body. That is reasonable, under the circumstances,” Rowley said on a television programme here hosted by a former government minister Dr Bhoe Tewarie.

“But suppose it becomes a situation where there is a variant of this virus that becomes even more virulent, is more deadly and spreads more rapidly and we know, through scientific information, that there’s a vaccine that could prevent that from happening, then the Government will have to take a decision on behalf of those persons who have the right to protect themselves from this virus. So a decision will have to be made,” he added.

Rowley told television viewers that if the voluntary situation gives Trinidad and Tobago the result that it can live with, “then we live with being voluntary.

“Some countries have already gone beyond that. I think in France it has been to the court and the country has taken a position, but even voluntary international travel may put some pressure on people to get vaccinated if they want to travel,” Rowley said.

Trinidad and Tobago has recorded 969 deaths and 35, 428 cases of the virus since the first case was detected in March last year and earlier this week, health authorities confirmed that the twin island republic has not recorded any strain of the Delta variant that has been linked to a new wave of infections and deaths across the globe.

During the interview, Prime Minister Rowley urged members of the population to ensure that they are vaccinated, using himself as an example.

“In my lifetime I’ve been vaccinated about six times against various kinds of things, either to stay here or go to school. I was vaccinated in primary school to be protected from polio, from typhoid, yellow fever; travelling, I’ve been vaccinated from hepatitis,” said Rowley, who had tested positive for COVID and received his first jab this week.

He said that while vaccines are not being forced on anyone to abuse their rights, it is necessary to protect human life.

“And if the decision at the level of the government that is responsible for the wider population, where the majority would like to preserve their life, where there’s something available, then the Government will have to take a decision like we’ve done with children.

“We vaccinate children because we don’t want our children to fall prey to the ailment that they could fall prey to. And we start vaccinating them even before they could think about it, at two months, four months, at six months, at one year, to protect them.

“And so this is a discussion that will take place, and given the circumstances of the nature of the threat, every government in the world will have to take a decision,” Rowley told television viewers.