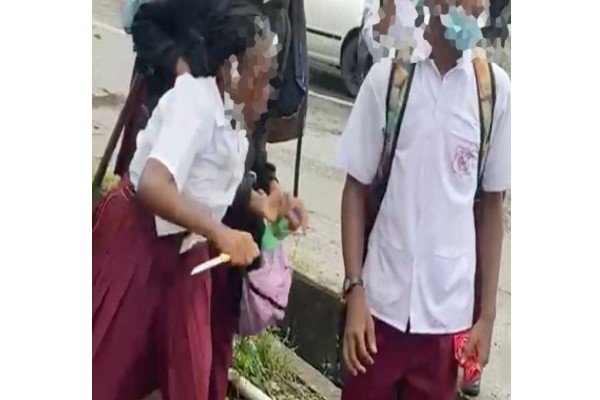 by Kevon Felmine (Trinidad Guardian) One day after being expelled, a teenage student of the Williamsville Secondary School has been formally slapped with two charges following the stabbing of a schoolmate on Monday.

WPC Blackman of the Southern Division yesterday read charges of wounding with intent to cause grevious bodily harm and possession of a weapon to the student at the Princes Town Police Station.

The student is will appear virtually before a magistrate soon to answer the charges.

The 15-year-old schoolgirl was arrested for a knife attack on her schoolmate at the Williamsville Junction on Monday.

The Ministry of Education announced on Wednesday that the student was being expelled from the school for the attack.

Public Information Officer for the Police Service, ASP Sheridon Hill, confirmed that the suspect was at the Juvenile Booking Centre at the Oropouche Police Station yesterday.

Hill said the investigating team of officers had to follow several procedures before laying the charges.

Meanwhile, doctors at the San Fernando General Hospital discharged the 15-year-old victim from the hospital yesterday.

The student spent three days getting treatment for stab wounds on her face, chest and arms.