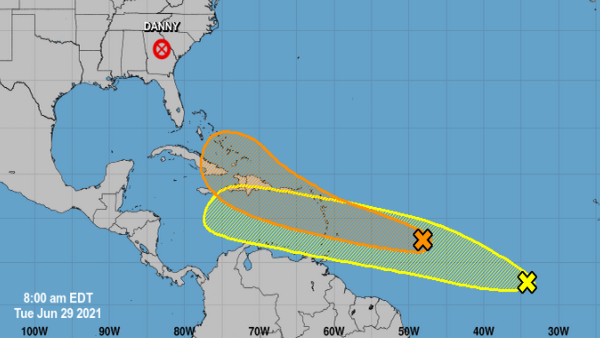 St. Kitts and Nevis (WINN): Forecasters predicted an above normal 2021 Atlantic Hurricane Season, and so far it seems to be living up to expectations.

Closer to home, two disturbances in the Atlantic Sea are making their way to the island chain.

According to the National Hurricane Center, Invest 95L which is 850 miles east of the Lesser Antilles will impact the islands by Wednesday night. The disturbance is moving at 15 to 20 mph and has a 30 percent chance of formation in the next 48 hours. Invest 97L is located 800 miles off the Cabo Verde islands and moving west northwest at 20 mph. It has a low (10 percent) chance of formation during the next 48 hours and a low (20 percent) chance during the next five days.

This is the sixth time that the month of June has produced three named storms.