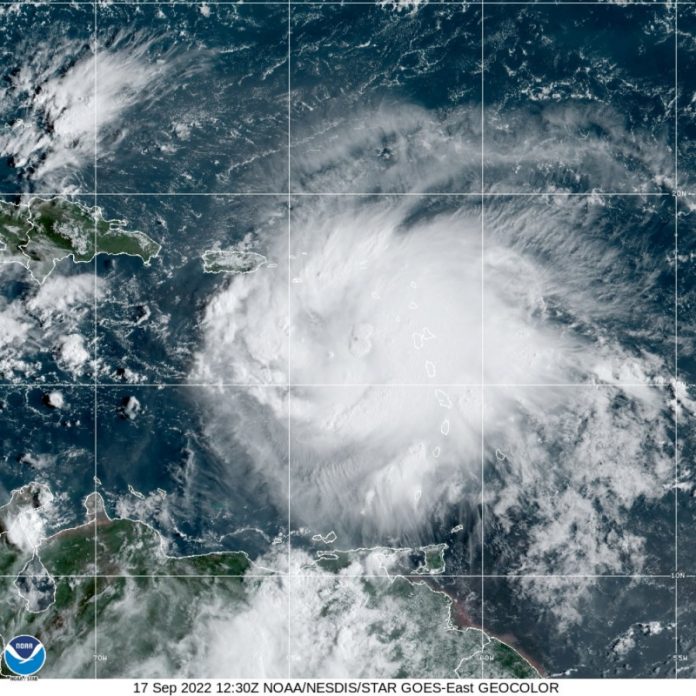 Burke added, “Today we are going to be experiencing mostly cloudy conditions with showers with a moderate chance of thunderstorms. Conditions are expected to gradually improve as we move into the night. Winds are forecast to be between 12 to 23 miles per hour with higher gusts. While seas are forecast to be seven to 13 feet, and as such, a small craft warning remains in effect. Due to the additional rainfall that is potentially expected, we anticipate at this moment one to three inches of rainfall, and as such, a flash flood watch remains in effect at this moment. We are asking the general public to exercise caution in areas that are known to flash flooding and especially the known ghauts here in St. Kitts and Nevis.”

Tropical Storm Fiona is expected to become a hurricane as the system moves through the rest of the Caribbean towards the Virgin Islands and Puerto Rico.

NEMA and the National Emergency Operations Center (NEOC) had not given the all-clear for citizens and residents to venture out but predicted that by noon, an all-clear could be given to moving about normally.

Operations at the air and sea ports are expected to resume mid-day, and the American Airlines Flight is expected to operate as scheduled.

The impact of Tropical Storm Fiona on the Federation’s infrastructure has been minimal.

George Gilbert, Director of the Public Work Department and the Chair of the Damage Assessment and Recovery Sub-Committee, gave a general assessment of what was observed after the passage of the storm. Gilbert mentioned no significant infrastructural damage, especially in problem areas like Old Road Bay.

Gilbert shared that there was a downed tree in the New town area and spoke of garbage bins and promotional banners being blown about by the storm and made a suggestion that those items should be taken down and secured to avoid any impact on the powerlines or obstructing the roads as essential services move about to make necessary assessments and repairs.

Collin Browne, Control, Operations and Protection Manager at the St. Kitts Electricity Company, said that Fiona had not significantly impacted the supply of electricity on St. Kitts, and at the time of the briefing, there were no significant outages. However, there were some moderate outages in the Challengers to West Farm area, Bird Rock and Industrial Site, Central Sandy Point and in the St. Peters area.

“At present, we have counted six downed poll reports, and one vehicle incident caused a downed poll report on the Frigate Bay Road. As well as a downed poll in Bird Rock, one in Old Road/Verchilds, one in the Shadwell Gardens area and one in the St. Peters/New Road area. We did respond to two of those prior to the suspension of restoration operations yesterday evening (September 16). We planted and tied up one, and we moved one out of the road. The other three were not impeding traffic, and since they were not impeding traffic, there was no purpose for us to go out in the storm and respond. So those three are remaining to be addressed this morning.”

Browne indicated that the damage was much less severe than previously expected.

Brian Dyer, Director of the Nevis Disaster Management Department, gave an update on the situation on Nevis, saying the impact was not significant; there had been no reports of flooding throughout the night into the morning. However, the wind gusts affected the electricity supply from the Nevis Electricity Company (NEVLEC).

Dyer said the Island experienced two outages. At the time of the briefing, Gingerland and Newcastle were still without power, and NEVLEC had been working to restore the electricity supply. Since then power has been restored to Gengerland and Jones Estate and Westbury to White Hall.