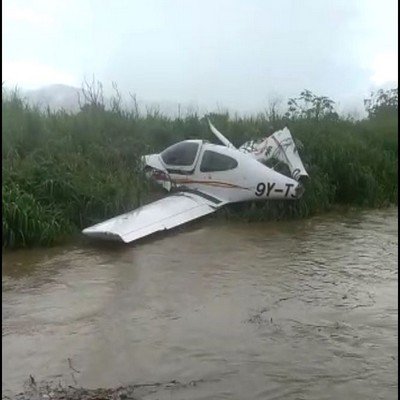 (Trinidad Guardian) A light aircraft crashed just before landing at the Piarco International Airport and two people were hospitalised following the daring crash-landing in farmlands on the perimeter of the airport.

Guardian Media understands that the incident occurred around 9.48 am yesterday, when a flight training aircraft, registration number 9YTJU, was heading towards the airport for a scheduled landing at runway 10. However, the aircraft, a Diamond DA40 Light four-seater model, reportedly experienced mechanical difficulties and the pilot had to execute a forced landing.

The plane crash-landed on the bank of the Oropune River, approximately 2,000 feet from the airport, nearest to the CAL Airlines hangar.