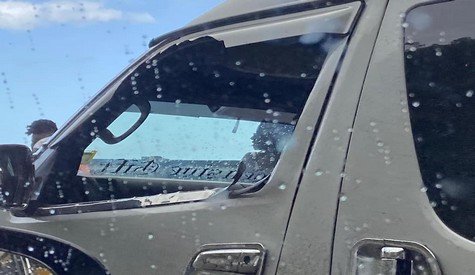 St Kitts and Nevis (WINN): Two people are reportedly injured after a boulder struck a passenger bus in Old Road Bay on Friday (August 21) sometime before 8:00 am this morning.

Mr. Abdias Samuel, Chairman of National Emergency Operations Center reported that the driver and the passenger in the front seat were hurt in the incident.

Samuel is asking persons to exercise caution and remain alert while traveling in the area.
This collision is an unfortunate reminder of the urgency of completing the Old Road Bay project.

The project began around March of 2019 and had an expected completion time frame of 12 months. It is now well into its 17th month.

The delay is attributed, in part, to get the necessary stones from the quarry where work has been impacted by COVID-19.

Currently, the contractor Rock n Dirt is in the process of pouring concrete and then asphalt is expected to be laid on the road.