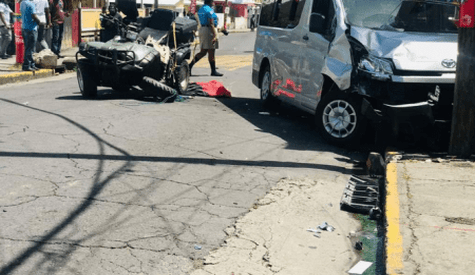 St Kitts and Nevis (WINN): Police have identified the two individuals who were seriously injured in the recent traffic accident involving an ATV and an omnibus.

According to information, the accident occurred sometime after lunchtime on Friday (May 26) and involved omnibus H3874 which is owned and was driven by Mark Archibald of Lodge Village and ATV P3431 which was driven by Javid Browne of Newtown with Raheem Patrick of Shadwell the pillion rider.

Police confirmed that Archibald was traveling eastward along Wellington Road when Browne came out of the stop at Branch Street and both vehicles collided.

Browne and Patrick were taken to the JNF General Hospital via ambulance. Patrick sustained several injuries and is warded in a critical condition, while Browne suffered a broken leg.

Shortly after the incident, graphic images and videos began circulating which showed the two ATV riders with their injuries as they grimaced in pain.