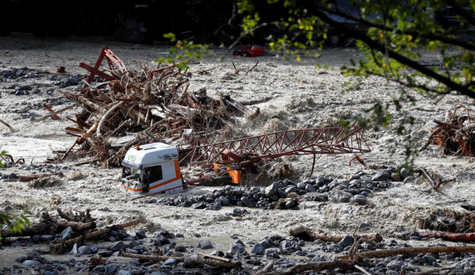 PARIS/ROME (Reuters) – Two people died and 25 people were missing in France and Italy after a storm hit border regions of the two countries, bringing record rainfall in places and causing heavy flooding that swept away roads and damaged homes, authorities said on Saturday.

The storm, dubbed Alex, ravaged several villages around the city of Nice on the French Riviera. Nice Mayor Christian Estrosi called it the worst flooding disaster in the area for more than a century after flying over the worst-hit area by helicopter.

“The roads and about 100 houses were swept away or partially destroyed,” he told French news channel BFM.

“I have been particularly shocked by what I saw today,” French Prime Minister Jean Castex told a news conference after visiting affected areas, adding he was concerned that the death toll could rise.