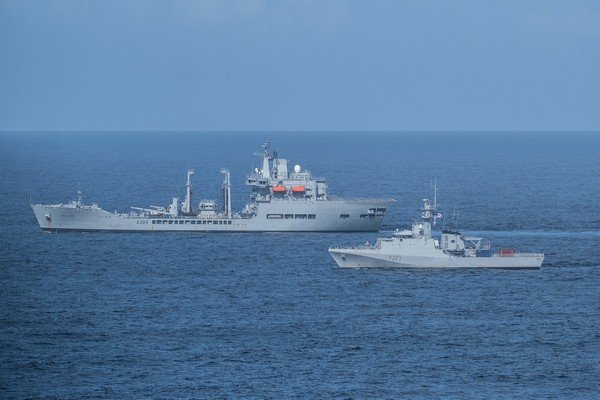 St. Kitts and Nevis (WINN): The United Kingdom’s Royal Navy has formed a task force in the Caribbean to provide immediate assistance to the region throughout the 2021 Hurricane Season.

In April, the Colorado State University released data that suggests that the 2021 hurricane season will be above average.

Additionally, the National Oceanic and Atmospheric Administration (NOAA) for the season predicted 13 to 20 named storms with 6 to 10 possibly becoming hurricanes which could include 3 to 5 major hurricanes.

According to NOAA, an average hurricane season produces 12 named storms, of which 6 become hurricanes, including 3 major hurricanes.

In a press release from the British High Commission in Barbados, it stated that the RFA Wave Knight will join patrol ship HMS Medway in Caribbean waters to enhance assistance available in the event of a natural disaster within the region.

The two ships are expected to arrive in Barbados on June 25 for a short visit and will be working with local authorities there and across the region to plan, prepare and coordinate any response if needed.

The Task Group Commander, Brian Trim, said, “While we hope for the best, we must prepare for the worst. These ships are the first-responders of the UK’s plan for disaster relief in the Caribbean… We have worked hard over the last few months to get ready for this role, and we will keep on training and preparing, learning from and cooperating with our partners in the Caribbean.”

Earlier this month, RFA Wave Knight delivered an assortment of aid from the people of Barbados and the World Health Organisation to people in St. Vincent, who were affected by the explosive eruptions earlier this year.

On the home front, National Disaster Coordinator, Abdias Samuel continues to urge the people of St. Kitts and Nevis to prepare for the season by securing an emergency supply kit, knowing the locations of emergency shelters and becoming familiar with NEMA, District Managers and Volunteers.